Sometimes, you just have to:

My house setting has a continent that’s very high fantasy and generally styled after wuxia in theme; I’m not going to go into great detail here, but to be brief and vague, there are three dominant human empires; one coastal nation, one inland and about tradition, and one northern that’s way into magic and fairly duplicitous.

A publisher (I’ll refrain from outing them at this point) is looking over Veranthea with an eye on picking it up—my ideas for how best to do that are really something folks, and I’m already getting some other people together on that—and the most developed continent you’ve already seen some of. Urethiel (and Trectoyri, for that matter) have their framework but until now, I haven’t had the time or impetus to flesh them out.

Last night I was talking to my muse as she fell asleep (her work schedule and mine aren’t particularly copacetic) and as usual, she gave me a brilliant idea; the publisher voiced an interest in a clan structure in my Eastern analog part of the world, and while it was brewing in the back of my mind I couldn’t best place how to do it. I explained that the zodiac and animal styles were out—those have been done and I was a big fan of that approach so that wasn’t an option. Talking about the elements available, we didn’t come up with much; fire, water, air, earth, metal, wood, spirit were not something I could stretch out easily into a diverse enough base for a genuine sense of culture across an entire continent.

Metal though, that sparked something. What if Fordhatta, the most tumultuous of the Empires, was all about metal? They could each monopolize one resource that represents their clan and get some derived traits from them to match the mineral! Malleable like copper or gold, resolute like steel, poisonous like m—you get the idea.

Right now I’m working out the leaders of these clans, which will finish up this pass on Urethiel’s development (for the cast, anyway; I’m sure there will be bits to add to the history after the 18 clans are given a sense of permanence). 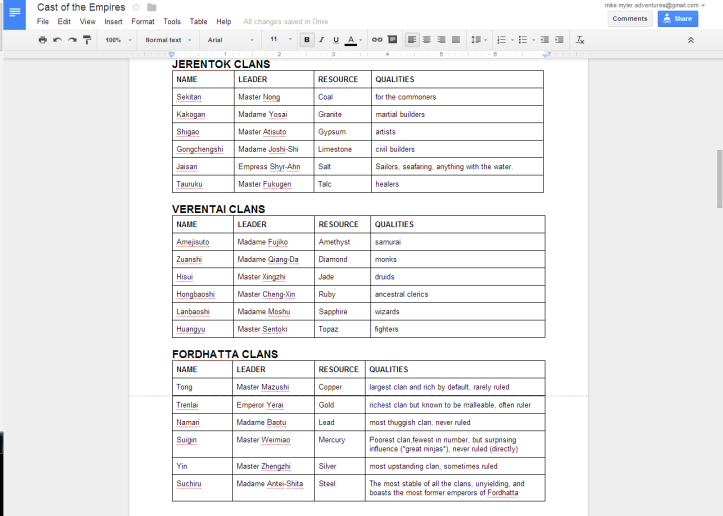