The Mists of Akuma Kickstarter is on its last two weeks and over 60% funded so far!

It has been a riveting campaign and we’ve blown through backer goals!

The project’s backers have unlocked TWELVE pre-generated PCs for use with Mists of Akuma, including cleaned off tokens for use on digital tabletops! If you’re keen to influence what content gets unlocked when we reach 200 pledges, pop over to these surveys (for races, backgrounds, and classes) and let us know what excites you most.

Each update has been bringing more short stories for the five legendary survivors of Soburin (Kanden the necroji ninja, Dai-Lan the monkey hengeyokai, Natsuko the kami priest, Karrooc the foreigner, and Tsunaro the Great Bolt), but other goodies have made the project pages as well! 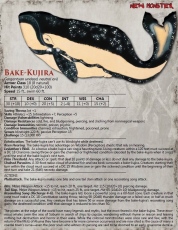 Articles, Interviews, and Reviews, oh my!

Want to know even more about the project and see what tidbits I’ve let slip through into the aether of the media? Check these out!