One of the reward levels for the Mists of Akuma Kickstarter was for me to run a game for your group through Roll20.net and one of those games has been concluded! Join RPGlory as they explore the abandoned city of Yuga, slaughter adeddo-oni by the dozens, explore an underground dungeon, and do battle with horrible creatures in its stone passages!

All of the games are recorded on YouTube but for the folks that just want the meat of the sessions, check out the summary below!

Escaping from Osore Prefecture after causing a stir in Supin, the party (Chuda Masaru, Shibonotoko, Tetsujin, Fuk, and Crow) take to a raft dragged along across the nearby bay by their umibo yamabushi. Upon reaching the seaside city of Kamenotochi a messenger delivers a sealed scroll from a bengoshi of Satsujin–they have been commanded by one of the clan’s Seer Swords to retrieve Lord Chianji Satsujin from the city of Yuga on island not far from their shore to the north. It came with a substantial payment as well and with their coin spent, the party charters a boat to take them northward.

In a few days they make landfall in a berth not far from the settlement and make the rest of their way on foot, but strangely the din of a busy city does not welcome their approach to the gates of Yuga–not a single resident is in sight, almost as if everyone had left. Cautiously making their way into the city, Tetsujin and Crow hear something from a few buildings away and go to investigate. The adventurers come upon a single addedo-oni, surprising the hunchling long enough for Shibonotoko to explode its skull with an arrow. It was not alone however and in a flash dozens of the undead swarm over the environs of Yuga to surround the party!

They quickly retreat into a nearby building and Chuda throws up a shaped wall of force to funnel their attackers, allowing Crow and Fuk to unleash unarmed hell on every foe foolish enough to approach them. Dozens and dozens of undead die by spell and fist before a lull occurs and after briefly flitting into the air, their tengu monk realizes that the hundreds of people have been transformed into bloodthirsty monsters by the Mists of Akuma! 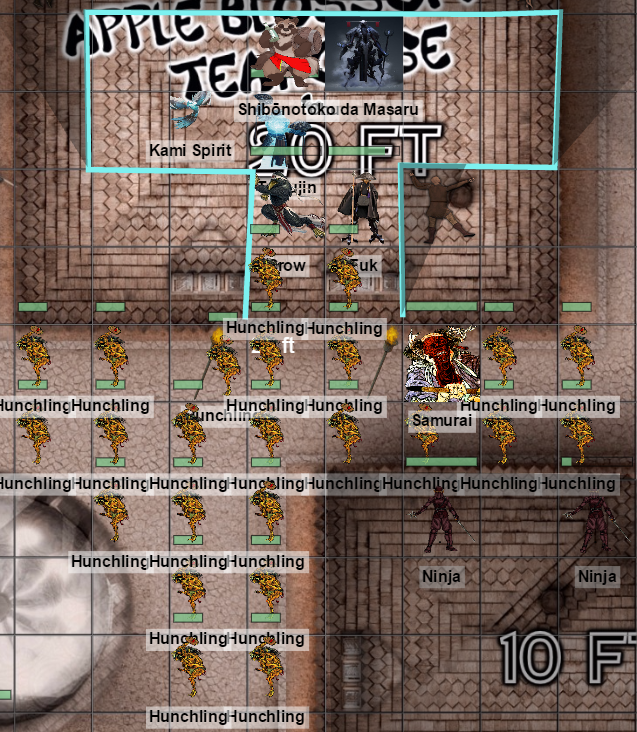 Tetsujin calls upon spirit guardians and uses its powerful radiance to slaughter scores of the creatures as they slip from house to house. Hunchlings die in droves but even with the deft martial prowess of the umibo’s allies, a few undead samurai wearing the emblems of Satsujin break through his magic to strike at him. All the same the adventurers reach Iesu Castle on the hill above the city, the monsters harrying them stopping outside of its moat to gather in vast numbers. 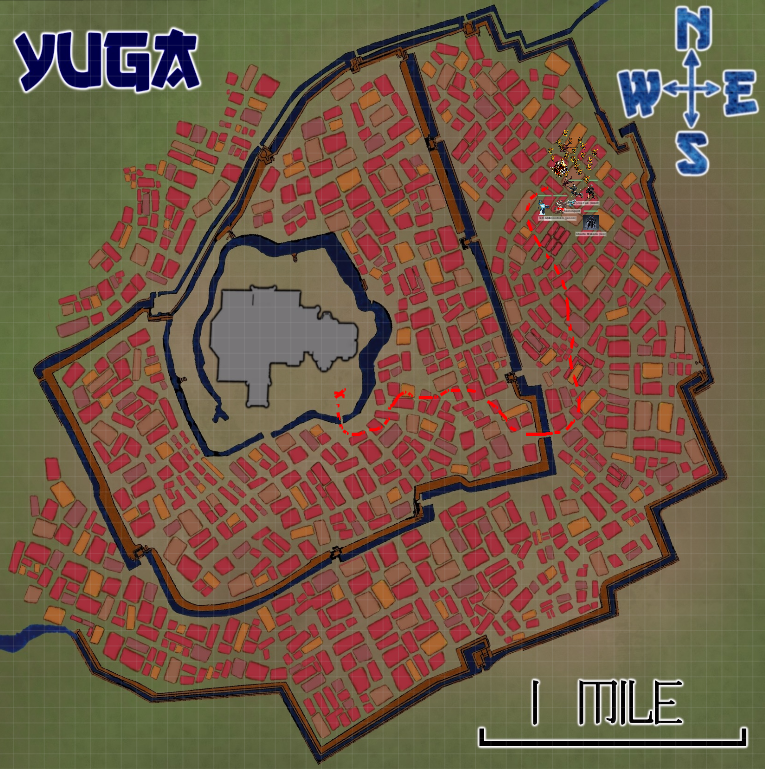 The party quickly evaluates Iesu Castle’s exterior and Tetsujin’s detect magic reveals that the entire building is enchanted to both clean itself and protect against teleportation. With the hordes briefly held at bay the adventurers step inside to find the building in disarray though Chuda’s keen eyes for detail intuits that no struggle took place. Fuk uses his incredible speed to rapidly canvas the estate, finding that nothing of value has been left behind, but it is Crow and Tetsujin that spot a bird-like human peeking from the stairs to the basement before flitting out of sight. With no other leads and legions of adeddo-oni charging up the hill to Iesu Castle, they choose to follow and fortify the basement if need be. Their tengu ally quickly finds a secret door however and the party is able to enter the hidden stone passage behind it before their attackers can reach them, closing it shut with none of the monsters any the wiser. 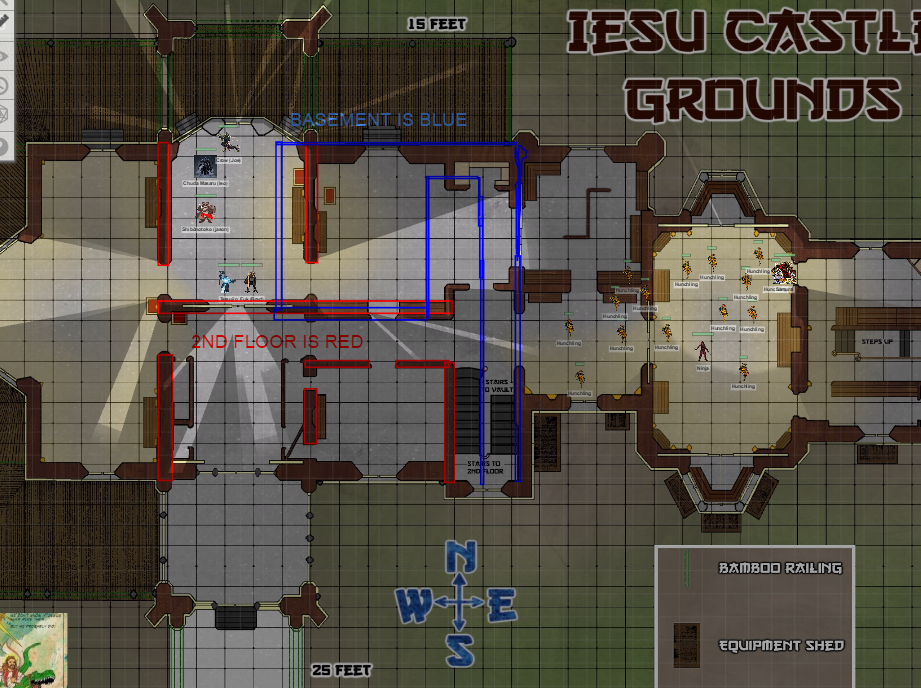 The hallway descends for hundreds of feet before reaching a bridge that crosses over an underground river to the worked metal doors of a dungeon. Gathering their wits and with no enemies in sight, they stop to catch their breath before hopefully finding Chianji Satsujin–or his corpse–inside. 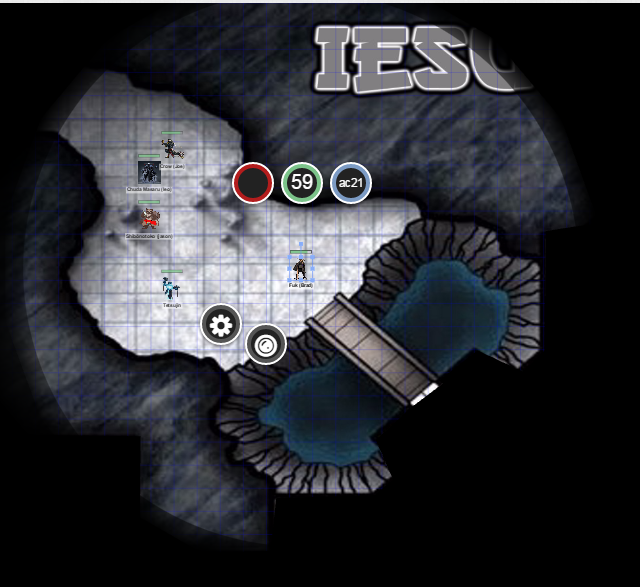 As they rest Chuda senses a strange odor in the air and finds spores floating throughout the cavern. Shibonotoko breaks out her alchemist’s kit and determines that their violet-brown hue was unnatural and had no biological reason for being the odd color.

When confronted with a thick stone door Fuk unleashed his martial prowess, destroying it in less than a minute–making the attackers waiting beyond it ready to strike! The sickly-looking hengeyokai viciously rain blows down upon the bakemono as his allies rally to his side but before they are all beaten, one escapes to the northern passage. 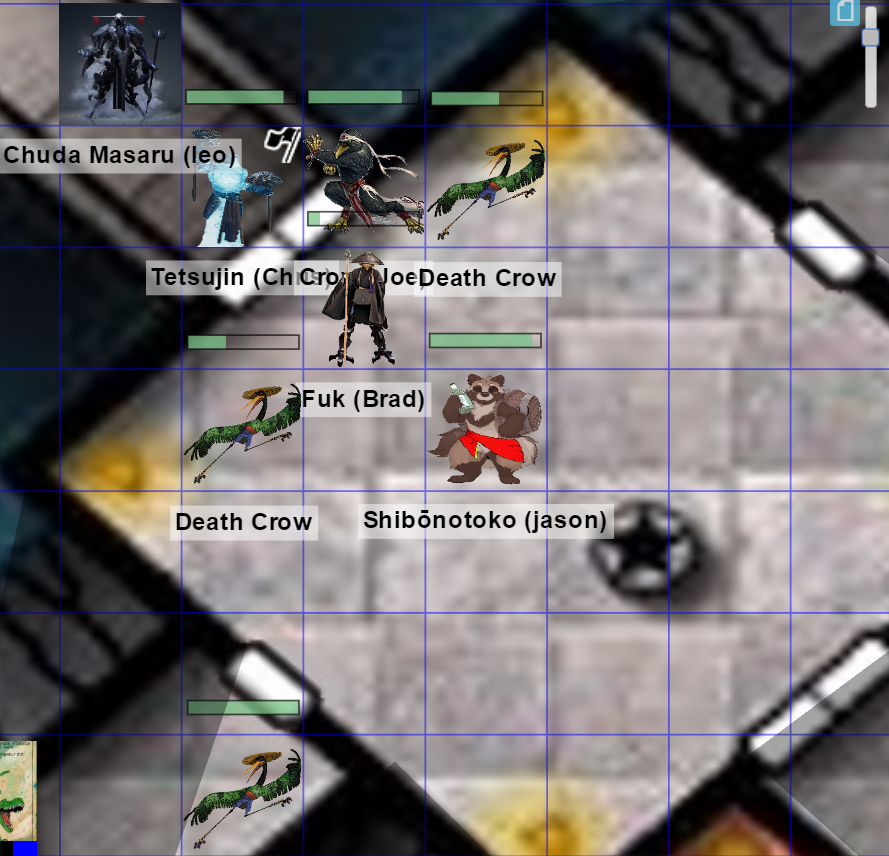 Fuk gives chase and sets off a trap of needles but ignores them (and the poison on the points of the dozens that stick into his skin) and kills the fleeing Death Crow but it cries out as it is slain, earning the attention of a powerful beast that explodes into the passage. Shibonotoko throws oil and fire at it but the tengu and bakemono monks are what bring the creature to its end. 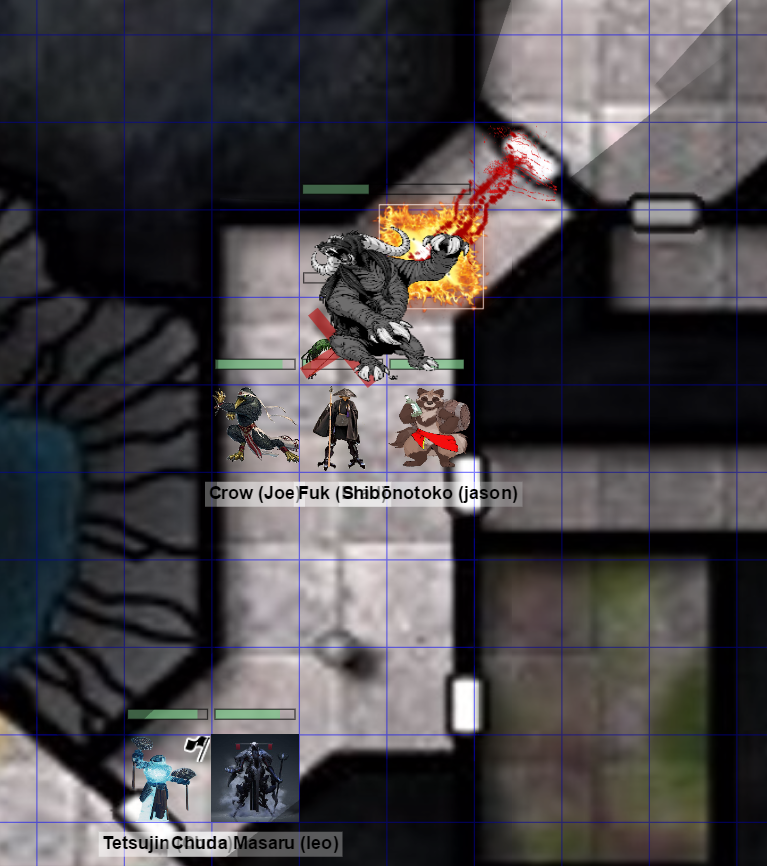 As the party looks over the thing’s corpse, Shibonotoko wanders back towards the entrance and is attacked by another Death Crow! Fuk leaps to follow with his fantastic speed but falls short, bumbling into Chuda in mid-air and tumbling to the ground as their necroji wizard blasts it with flames. Their attacker flees southward and they give chase, Crow finding and unlocking the door he thinks it went through to discover an underground ravine. While the party explores the new area Chuda checks the unopened door and finds the Death Crow he just chased away with a fire bolt completely healed, slathering a viscous green substance all over itself to mend its wounds. 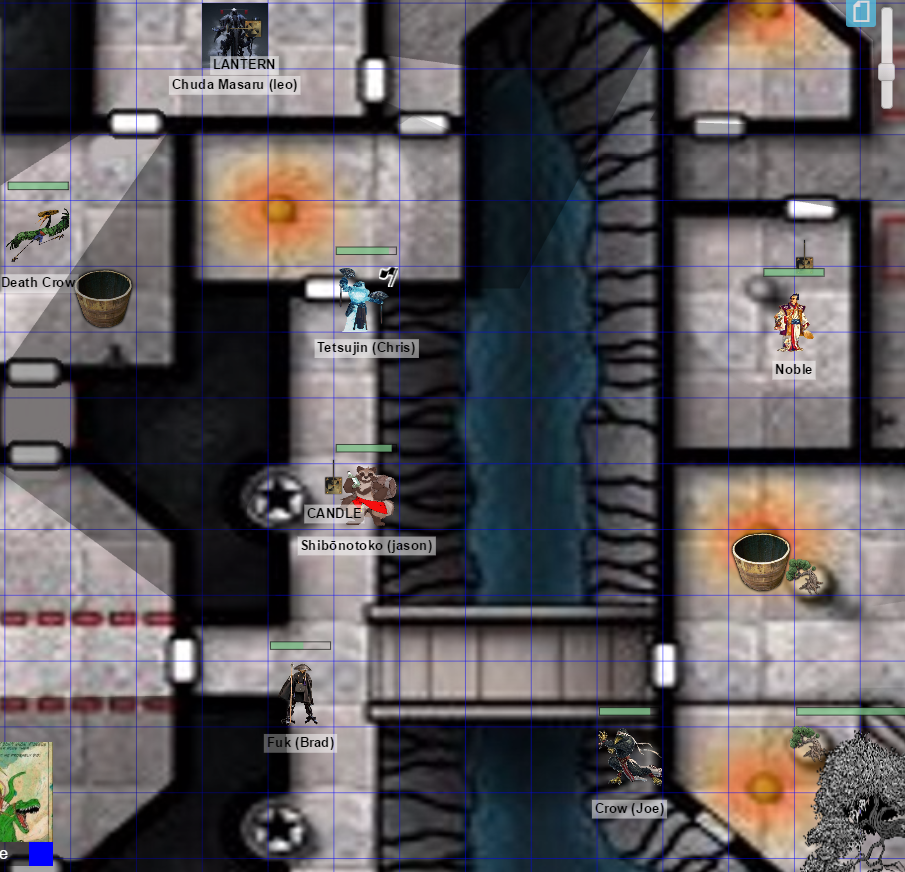 In the underground ravine, Crow flies too close to the windowed atrium across the bridge and a strange hum rattles as his soul–then the aroma began, spreading rapidly all over the dungeon and gripping the adventurers’ minds, drawing all but Fuk and Chuda to its source. Crow opens the door and finds a ghastly tree with strange head-shaped fruits, and though he and Shibonotoko walk towards it they both manage to resist the urge to eat from the wretched thing. A vicious combat breaks out and a strange seer reveals himself, using powerful psychic abilities and a quick scimitar to bring low both Crow and the tanuki rogue! 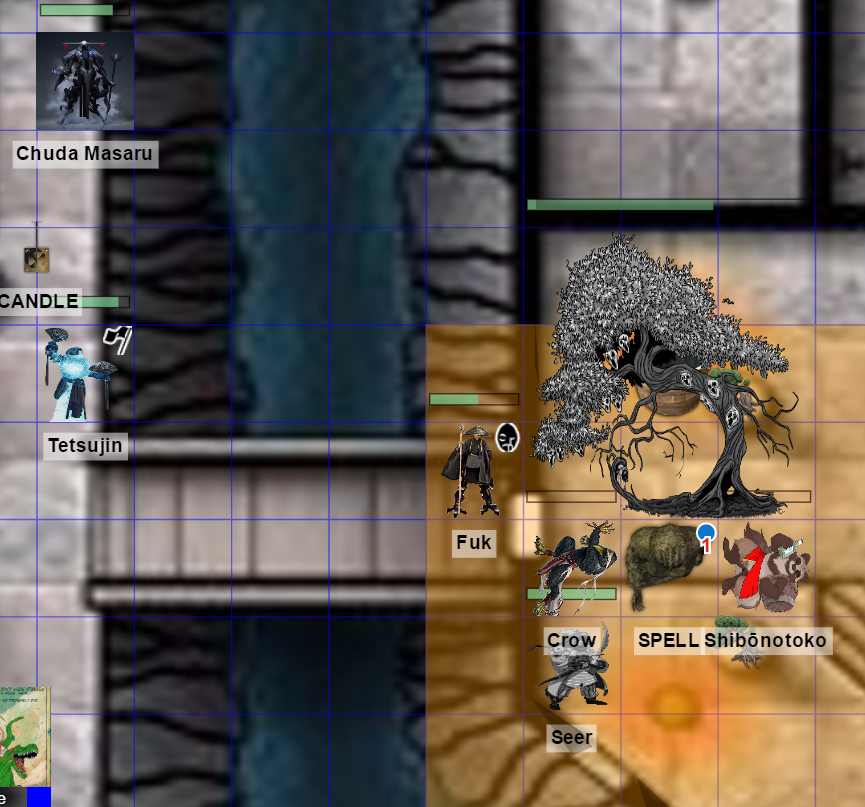 Tetsujin’s kami frees him from its influence and rescues Crow’s mind from its control and before being beaten down by the seer manages to grievously wound the jinmenju using his fiery blast strike maneuver. Once freed the umibo casts spirit guardians and trudges forward as Chuda unleashes a wall of force, trapping the monster as the cleric’s magic gradually wore it down. Once their tactic takes hold the seer disappears into the dungeon, returning soon after with a hostage–the noble the party was ordered to collect! 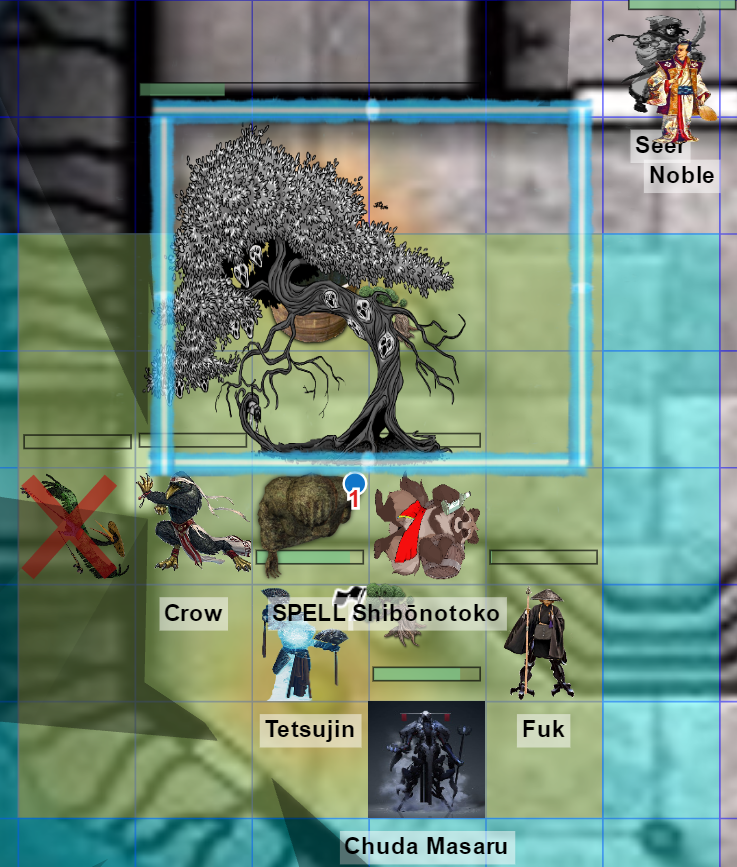 The necroji wizard nearly blasts him with fire and Fuk slams his fist into his face–so the seer makes good on his threat, slashing the noble’s neck open with his blade and fleeing. Healing their allies and saving their charge’s life, the adventurers quickly leave via a teleportation circle cast by Chuda (who chillingly insures the man they are saving that if anything other than “they are my saviors” is said, there will be dire consequences) but before leaving the dungeon they discover some strange propaganda and one name: Sekaina Nanbasen, the death cult plaguing this region.

Arriving in the Satsujin family’s estate in the prefecture’s capital of Ki-Yosa, the adventurers piece together that the kidnapper and scourge of Yuga city is a rogue Seer Sword, another bengoshi like the man who hired them. They collect their payment (thousands of gold) and travel papers but are quickly ushered off the grounds and strongly urged to leave Satsujin Prefecture.

The city of Yuga is abandoned and overrun with monsters–what will become of it?

Where in Soburin will the adventurer’s roam?

Is Fuk really the better fighter or will Crow prove his superiority?

Will Tetsujin and Chuda’s magic still save their monk allies from the peril they fling themselves into?

And perhaps most importantly,

what in the name of the ancestors did Shibonotoko do with her wine bottle opener?