I’ve been a very busy fellow since my last general update in late January — editing for several other folks’ projects (Ponyfinder‘s Races of Everglow and cleaning up a product for Salt in Wounds), setting up things for projects in the future (this summer will be very exciting), and putting a bunch of stuff through layout (Veranthea Codex: Adventurer’s Handbook and 2099 Wasteland, both nearly 200 pages, as well as another 30+ page adventure for Mists of Akuma called Cursed Soul of the Scorpion Samurai), but today is not about me or other dudes, it’s about women.

In that spirit today’s RPG character from the vault is Abel(line) Rappeport: EVERY(WO)MAN, a character I played in a heavily modified Abberant game set in the Marvel Universe many years ago. While Abel himself was a man, I turned back to the character when making Hypercorps 2099 and as Steve Kenson has already made a very excellent Everyman, we decided to make him into a woman (specifically a black woman because they are woefully under-represented in RPG art).

I could talk about all the awesome stuff he did (like almost surgically implanting a bomb into the skull of a crazy disruptive fellow PC or his brilliant response to the party being ambushed by HYDRA [he did the salute, all of the henchmen did as well, tables turned]) but in short Abel’s (and Abelline’s) thing is being old, knowing everybody, and being pretty good at pretty much everything. To get a feel for the game the character originated in I strongly recommend listening to the only one of the weekly  “newsie” recaps I can find (I used to make one after every game).

However I’m droning on. Enjoy Abelline and unleash her in your next D&D 5e or Pathfinder game! If you’re game for Aberrant or keen on more of my illegible handwriting, Abel is included as well. Enjoy! 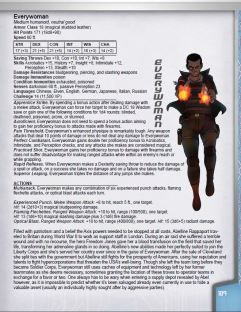