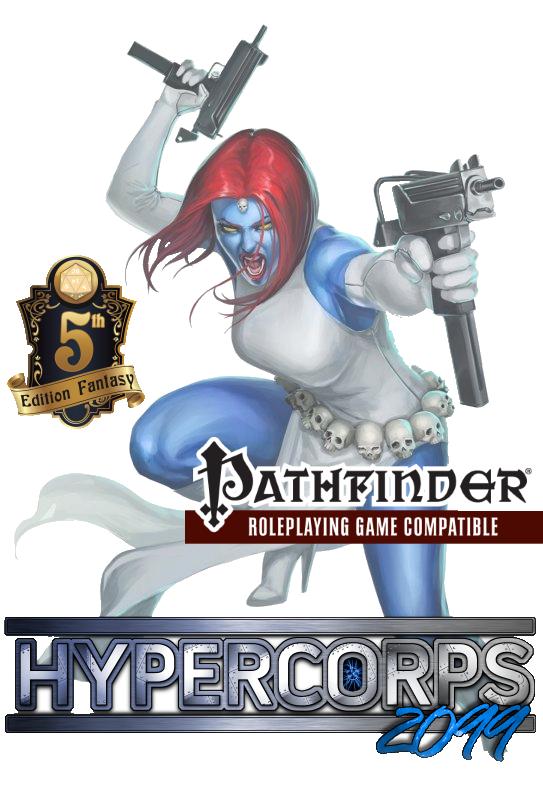 By request this week we have a character all around extremely well-suited for a Hyper Score build: Mystique! If you have a favorite character you’d like to see, please comment and let me know. Tune in next week for another request: Kitty Pride AKA Shadowcat!

TACTICS
During Combat Mystique is a master of deception both in combat and out. She ambushes an opponent then uses move actions to feint, attacking with unarmed strikes when a foe’s guard is down. Mystique attempts to isolate and dispatch foes before assuming their form to approach her enemy’s allies.

SPECIAL ABILITIES
Effortless Sneak (Sp) While Mystique is underground or in an urban area, she can take 10 on any Stealth check she makes.
Exploit Weakness (Ex) Mystique can observe a creature or object to find its weak point by making a Wisdom check and adding +9 against a DC of 10 + the object’s hardness or the target’s CR. If the check succeeds, she gains a +2 bonus on attack rolls until the end of her turn and any attacks she makes until the end of her turn ignore the creature or object’s DR or hardness.
As a swift action Mystique may to analyze the movements and expressions of one creature within 30 feet, granting her a +4 bonus until the start of her next turn on Sense Motive checks and Reflex saves, and a +4 dodge bonus to AC against that opponent until the start of her next turn.
Misdirection – 18 points (Ex) At the start of each day Mystique gains a pool of stealth points. Before making a Stealth check, she can choose to put stealth points into the roll, gaining a bonus on Stealth checks equal to the number of stealth points she puts into the roll.
Pain Points (Ex) Mystique’s advanced knowledge of humanoid anatomy grants a +1 bonus on critical hit confirmation rolls and increases the DC of her stunning fist by 1.

NEW HYPERNAUT POWER: Perfect Mimicry
Tier 1; Action swift; Save none
Effect Mystique can psionically shift the atoms of her body to duplicate any humanoid of either sex, wearing any kind of clothing. She can precisely duplicate another person’s retina pattern, finger, palm and skin-pore patterns, and vocal cords. She can increase her volume, but not her mass. While assuming another creature’s form Mystique gains a +30 hyper bonus on Disguise checks.

NEW HYPER FLAW
Loner: You have been abandoned, betrayed, and forgotten by more allies, family members, and lovers than you can count–even your own children are suspect. As a rule you have learned that the only person you can ever possibly be loyal to is yourself and that makes you hard for others to trust. You do not gain morale bonuses from the magic items, spells, or abilities of other creatures (any morale bonuses you grant yourself or gain from a feat, class, or racial ability function normally.)

OOF! I made a little more work for myself than I needed to here but I’m very happy with how she came out–another great example of a character very well-suited to the Hyper Score System, complementing the standard Pathfinder ruleset with abilities that put her into super territory. I also managed to keep her at a relatively lower level–this is someone you can toss at a group of middle-range PCs for a very, very, very fun encounter (and you are welcome to change her favored terrains if it’s not underground or whatever; chock it up to her hypernaut power).
While the image I chose has her double-wielding SMGs, I prefer my Mystique to be more about kickass martial arts (a la the movies) and less about shooting things. If you *want* her to be more about shooting things, swap out her feinting, improved crit, and weapon feats (a total of 7) for Point Blank Shot, Rapid Shot, Shot on the Run, Two-Weapon Fighting, Improved Two-Weapon Fighting, Precise Shot, and Rapid Reload (or whatever other shoot-y things you might pine for).
You could also easily do her as a meganaut (amping her Constitution and Charisma or Dexterity) and use hyper feats to access some disguise self-esque spell-like abilities, or go after the build as a parallel, but she’s so damned good at it I thought it was deserving of a hypernaut power.
The movie costuming was neat but just, I mean, come on. Mystique is always going to be the white-adorned skull-belted badass from the 90s animated series. That’s just what it is.

Saving Throws Dex +9, Int +6
Skills Acrobatics +9, Deception +11, Insight +7, Perception +7, Sleight of Hand +9, Stealth +13
Tools thieves’ tools
Damage Resistances poison
Condition Immunities diseases, poisoned
Senses darkvision 60 ft., passive Perception 17
Languages English, German, Spanish
Challenge 12 (8,400 XP)
Background Feature (Criminal) – Criminal Contact. Mystique has a reliable and trustworthy contact who acts as her liaison to a network of other criminals. She knows how to get messages to and from her contact, even over great distances; specifically, she knows the local messengers, corrupt caravan masters, and seedy sailors who can deliver messages for her.
Cunning Action. Mystique can take a bonus action on each of her turns in combat to take the Dash, Disengage, or Hide action.
Expertise. Mystique’s proficiency bonus is doubled for any ability check she makes that uses Deception or Stealth.
Exploding Ki Technique. Mystique gains a +4 bonus (her proficiency bonus) to attack rolls with firearms without requiring a bonus action aiming, and she does not suffer disadvantage while making attack rolls with firearms while within an enemy’s reach. If she would otherwise not require a bonus action aiming, Mystique gains a +4 bonus to damage when she spends a bonus action aiming. In addition, when she is wielding two firearms, she may spend a bonus action to gain an additional attack.
Fast Hands. Mystique can use the bonus action granted by her Cunning Action to make a Dexterity (Sleight of Hand) check, use her thieves’ tools to disarm a trap or open a lock, or take the Use an Object action.
Hyper Ability Trait: Dexterity – Dexterous Warrior). Mystique increases her ranged weapon damage by 2.
Hyper Attack. Mystique may make an additional weapon attack when she uses her action to attack.
Hyper Feat: Adrenal Hyper (Constitution – Hyper Blooded). Mystique is resistant to poison damage and immune to both diseases and the poisoned condition.
Hyper Feat: Adrenal Hyper (Dexterity – Hyper Dexterous 2/long rest). When Mystique fails a Dexterity saving throw she may choose to roll again with advantage.
Hyper Flaw: Unnatural. In her natural form, Mystique has disadvantage on all non-Intimidate Charisma checks.
Hyper Mortality. Mystique has advantage on saving throws against death and death effects.
Hyper Proficiency +1. Mystique’s bonus to weapons and other features (that are not skills or equipment) she is proficient with increases by 1.

Ki (6 points). Mystique harnesses the mystic energy of ki and can spend these points to fuel various ki features. When she spends a ki point, it is unavailable until she finishes a short or long rest, at the end of which she draws all of her expended ki back into herself. She must spend at least 30 minutes of the rest meditating to regain her ki points.

Ki-Empowered Bullets. Any attacks Mystique makes with a firearm count as magical.
Martial Arts. Mystique can use Dexterity instead of Strength for the attack and damage rolls of her unarmed strikes and monk weapons, and she rolls a 1d8 (raised from 1d6 because she is an abbernaut) in place of the normal damage of her unarmed strike or monk weapons. In addition, when Mystique uses the Attack action with an unarmed strike or a monk weapon on her turn, she can make one unarmed strike as a bonus action.
Second-Story Work. Climbing no longer costs Mystique extra movement and when she makes a running jump, the distance she covers increases by 5 feet.
Shapechanger. Mystique can use her action to polymorph into a Small, Medium, or Large humanoid she has seen, or back into her true form (though her volume changes, her mass does not). Her statistics, other than her size, are the same in each form. Any equipment she is carrying isn’t transformed but clothing or light armor she wears is. Mystique reverts to her true form if she dies or becomes incapacitated.
Sneak Attack 2d6 (1/turn). Mystique deals an extra 7 (2d6) damage when it hits a target with a weapon attack and has advantage on the attack roll, or when the target is within 5 feet of an ally of hers that isn’t incapacitated and she doesn’t have disadvantage on the attack roll.
Stance of the Striking Serpent* (2). Mystique’s unarmed strikes deal an additional 1d6 piercing damage, she gains advantage on Acrobatics checks, checks and saves to avoid the prone condition, and creatures are at disadvantage to resist her attempts to grant them the prone condition.
Unarmored Defense. While she is wearing no armor and not wielding a shield, Mystique’s AC equals 10 + her Dexterity modifier + her Wisdom modifier + the number of martial arts stances* she knows.
Unarmored Movement. Mystique’s speed increases by 15 feet while she is not wearing armor or wielding a shield, and she is able to move along vertical surfaces and across liquids on her turn without falling during the move.

Wondering what a 12th level hyper D&D 5E build shapeshifter looks like when it’s built by the book? This is it! I’m pretty fond of this build and may be reskinning it to field her against some 2099 Wasteland survivors sometime in the near future. 😀