A little backstory
This is tonight’s summary from the Mists of Akuma Kickstarter backer game. They wanted an intrigue game so I concocted The Imperial Matchmaker, an adventure path where the PCs are embroiled in the manipulations of many different bengoshi as Emperor Hitoshi Masuto enforces the marriages of 20 different nobles from the four clans with ancestral feuds dating back to the Battle of Broken Spears.

This is, as you can see, pretty chock full of intrigue.

After 11 sessions we finally got to the first day of the weddings and the scenario ended up being so fun I can’t wait to share it–please enjoy my recap below!
I’m also considering taking this pile of material I’ve put together and making it into a big old book (which would mean another Kickstarter) so if you’ve been on the MoA train for a while now, this is a boxcar worth tagging. 😉

Expect a full recap (or rather, access to the GM summaries I keep for the game) after the campaign comes to a close (like HEROES OF THE HYPERNET). 😀

The adventurers are awoken by polite but hurried knocking, the servants of the Gekido family insisting that the party must hurry to prepare themselves in time for the first wedding ceremony. Ironically the foreigner-borne Reiko prepares herself best, perfectly donning the formal attire required for the seminal event. Yokai-O gets a little help from a lesser noblewoman with his attire (as her followers-on chortled in amusement) and refills his stash of healing potions while Tera-O stops by the tailor shop, finding a message on the counter but little else.

Arriving about 20 minutes before the bridal and groom processions everyone but Tera-O embarrasses themselves — Yokai-O mentions protecting Yuzuki Gekido from a ninja assault earlier in the week (much to the astonishment of the nobles around him) and Reiko speaks out of turn about the secret tunnels beneath the city. Then the bride, groom, and Emperor Hitoshi himself arrive in Krei-Thai Garden from the east, west, and north (respectively). All throughout the area are numerous guests but many guards as well–more than a half dozen mekkusenshi and a trio of Masuto commissars–to make for a crowd that measures in the hundreds, all of them closely packed together on the huts all throughout the gardens. Though a cloud high above spreads shade that makes the sunny day overcast, for a moment all seemed well. As the nuptials reached their end however, a sudden cry comes from above and only the keen oni-touched ears of Yokai-O pick out the words “BONZAIIIIII!!!!!!!!” as a quintet of men and women, their bodies strapped with explosives, fall from high above! The warlock lashes out with eldritch blasts that destroy one of them, causing him to erupt in a fireball in the air rather than beside Emperor Hitoshi!

The many guards of Emperor Hitoshi react slowly but effectively, grabbing the ruler of Soburin and blasting away to the north and out of sight as the wedding becomes a battlefield. A total of 20 kamikazes drop onto the Krei-Thai Gardens and kill almost five dozen guests, engulfing the park in flames. In the chaos Tera-O immediately destroys part of the gardens as he rushes to the bride, seeing Yuzumi go faint and catching her in his arms–not only is she bleeding from a wound in her side, her body is practically hot to the touch and he decides saving her is essential. Dame Tomoe-Doe attempts to remove her poison with her paladin abilities but it resists and after blasting a few more of the attackers Yokai-O uses more potent magic to hold it at bay. In her fever Yuzumi calls out for her betrothed Noburu and “zunkhasa poison”, a myth the warlock recognizes. Thought by many to be a fable, the legendary toxin is said to have killed a sire to the imperial throne in the ancient past and to be so potent that it resists even the most powerful magic.

As the two evacuate Yuzumi’s fevered body to the streets west of the gardens, Reiko and Dame-Tomoe Doe continue to fight off the kamikazes–the clockwork mage uses her magic to put them to sleep while the usagi samurai leaps up to strike them down. One explosion causes a mekkusenshi to turn violent, slaying another of its kind before the hengeyokai warrior decapitates it. When two of the aerial attackers are beyond her reach and about to kill a crowd of fifteen innocents she uses her paladin magic, disemboweling herself but instantly slaying a falling bomber that ignites his fellow (saving the cadre of nobles and servants from a violent death). 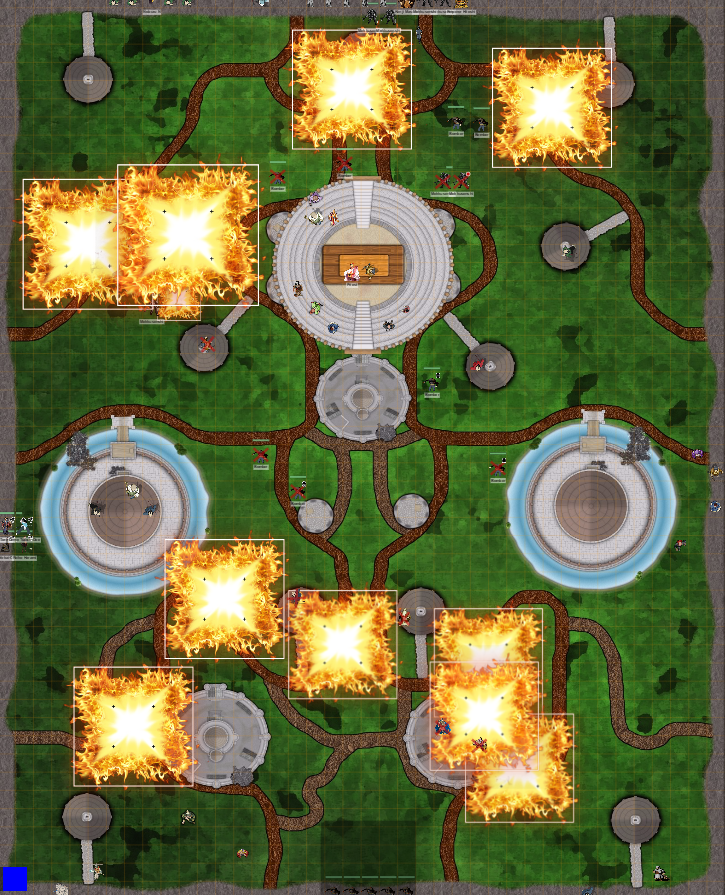 Fleeing from the pandemonium in the southern Heavenly Estates the party take Yuzumi to the House of Onryo, turning over the noblewoman to the medical experts there. They are astonished to hear that she has been afflicted with zunkhasa poison but produce a cure–though it is hundreds of years old, its contents aged and dried. With Yokai-O’s aid their chirurgeons successfully reconstitute the unique antitoxin but its potency has been greatly reduced and will only stave off the sickness. In order to save Yuzumi’s life, a new fajuri potion is required.

Though the doctors of the Imperial Guard can offer most of the ingredients needed for the tincture, three rare and essential items elude them–pandobi leaf, tora stem, and yukazi flower, all from plants that grow only in the Zunkhasa Rainforest in the southern prefecture of Ikari. Speaking with Matsuro Gekido back at the estate, he agrees that now more than ever it is essential that Yuzumi be spared from an early death and offers to pay whatever is necessary for the party to teleport to the city of Nesuto and acquire the rare reagents. Fortunately Emperor Hitoshi has called for a stay to the weddings as the city’s defenses are brought to full readiness to disrupt any further attacks, giving them a crucial window of opportunity in which to act.

Tera-O subtly convinces the master of the Gekido in Sanbaoshi to be wary about protecting the bride-to-be, manipulating a quarantine that will keep her from even her betrothed (something reinforced by a rumor of contagion spread by Yokai-O). With their affairs in order and carrying a writ from one of Soburin’s most powerful nobles, the party climb the highest tower of the Mage Academy and step into a teleportation circle conjured by the Magemaster himself….