There has been an explosion of interest in this series so we’ve got a bit of a queue built up now: next week it’s the Venom symbiote (folks that have FAMOTH will know what’s coming!), then Ghost Rider (in which case I may just point at Clinton Boomer’s tumbler), Thor, and then like 10+ others on deck. I am still taking requests however so let me know and we’ll get them on the list–the sooner the better!

FUN ASIDE: Earlier today I was prompted to create a spreadsheet that lists the grosse numbers for the various DC Comics and Marvel Comics films in a simple box-office comparison. It is not adjusted for inflation and may not have every single movie that qualifies but it’s not bad: check it out if you like! 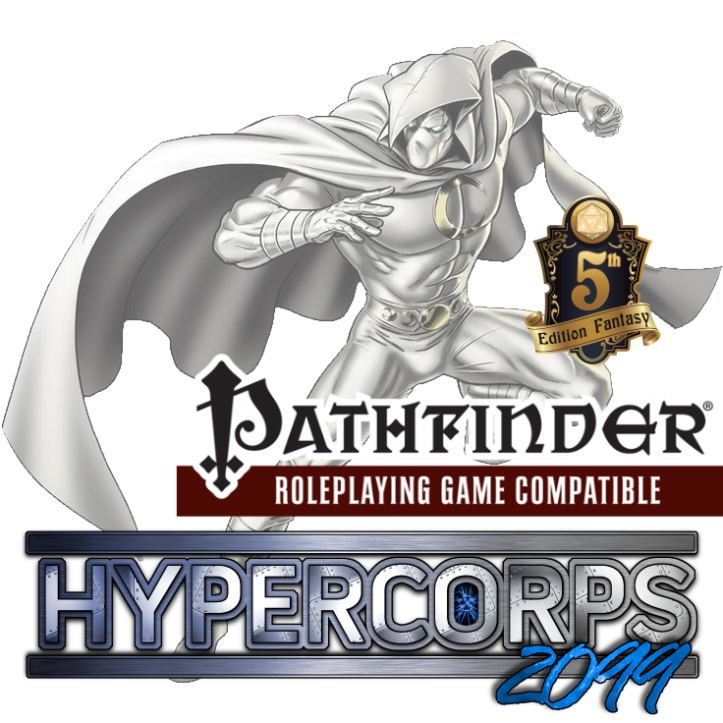 SPECIAL ABILITIES
Case the Joint (Ex) If Moon Knight spends at least 1 hour in a location while in his social identity, he can attempt a DC 20 Knowledge (engineering) check. If he succeeds, he gains the ability to later reroll any one failed skill check involving the location’s layout (such as a Stealth check to sneak into the location, a Disable Device check to disable an alarm, or a Sleight of Hand check to snatch an object from a pedestal). For every 10 by which the check exceeds 20, Moon Knight gains an additional reroll. If he fails to return to the location within 1 week, the situation changes too much and he cannot use the rerolls. Moon Knight can’t case the same joint more than once a week.
Dual Identity (Ex) This character has two identities: his NG social identity as Marc Spector, and his CG vigilante identity, Moon Knight. Knowledge checks about one identity do not reveal information about the other, and spells and effects that would locate one identity don’t find the other unless the caster knows both identities. The character picks an identity each morning and can change to the other one with 1 minute of costuming and mental preparation. This character sheet refers to him as Moon Knight for simplicity, except in abilities that he can use only in his social identity. He can use abilities marked with a [V] in his social guise—but risks betraying his secret identity. He can share his dual nature with fellow PCs without penalty.
Gossip Collector (Ex) In his social identity, Marc Spector can gather information in 1d2 hours instead of 1d4 hours.
Hidden Strike (Ex) Moon Knight deals 2d8 points of precision damage against enemies that are completely unaware of his presence or who consider him an ally. He can also deal hidden strike damage to a target he is flanking or that is denied its Dexterity bonus to AC, but he deals 2d4 points of precision damage to such targets instead.
Quick-Change Mask (Ex) Moon Knight can remove his mask as a move action for one of two uses. He may either change his appearance as if using disguise self (giving him a +10 bonus on his Disguise check to appear to be another Medium humanoid) or switch into his other identity. He can attempt a Bluff check to create a diversion before taking off the mask. If successful, he can roll a Stealth check to hide as a part of the same move action he uses to remove the mask.
Seamless Guise (Ex) If a creature suspects Moon Knight of being Marc Spector (or vice versa), he can attempt a Disguise check with a +20 circumstance bonus to reinforce his current identity.
Silent Dispatch (Ex) [V]: When Moon Knight ambushes an enemy or enemies unaware of his presence, he can attempt a Stealth check at a –5 penalty. The result indicates the DC of Perception checks to hear his attacks until an opponent’s first action, when the DC returns to the normal –10 for hearing battle. Other enemies present can still see the attack; this talent only prevents the sounds of battle from alerting others.
Sleuth Deeds (Ex) Daring (1 luck point for +1d6 to Acrobatics, Climb, Escape Artist, Fly, Ride, or Swim; reroll results of 6 up to 2/day); Make It Count (1 luck point to gain investigator talent he does not already know to effect his studied strike; must meet prerequisites of the investigator talent); Opportunistic Evasion (1 luck point to gain benefits of evasion on successful Reflex save to take half damage); Run Like Hell (1 luck point to gain a +20-foot bonus speed for 1 minute; while active if he moves more than his normal speed in a round, he gains a +4 bonus to AC until the start of his next turn); Second Chance (1 luck point when rolling an inspiration die or using the daring deed (see above) to reroll either the inspiration die or the daring deed die; rolling 6 or higher on reroll does not regain a luck point and new result is kept even if lower); Sleuth’s Initiative (+2 initiative while Moon Knight has 1 luck point).
Studied Combat (Ex) Moon Knight can use a move action to study his enemy’s moves and gain a +2 insight bonus to melee attack and damage rolls against that enemy for 4 rounds or until he ends it with a studied strike. The damage is precision damage, and it isn’t multiplied on critical hits. Moon Knight can only have one enemy studied at a time, and if he wants to study an enemy he already studied that day, he must spend 1 use of inspiration.
Studied Strike (Ex) Moon Knight can end his studied combat early to add 1d6 extra precision damage to a successful melee attack against his target. He must be able to see the target well, and the damage doesn’t multiply on a critical hit or affect creatures immune to sneak attacks.
Unshakable (Ex) Moon Knight adds +4 to the DC of attempts to intimidate him.
Wealthy Hypernaut Power (Ex): Moon Knight is financially independent or otherwise able to procure goods and services with money not represented on his character sheet. None of these items may exceed a value of 12,000 gold. At the GM’s discretion, lethal or illegal items (such as robots or weapons) may require a normal expenditure of gold or roleplay to acquire.

Yeesh! Bit off quite a bit here! Fortunately I can foresee many times I’ll be revisiting this to save some time designing future characters. A+ for the Pathfinder (and Hyper Score!) systems for fitting the bill here, I think, though I’m not super familiar with Moon Knight and I’m sure I missed something. :p

Two Identities. Marc Spector and Moon Knight are one and the same. While he is assuming one persona any attempt to locate the other persona fails, as though they did not exist. Any attempt to identify the two identities as one another (without evidence, such as witnessing him changing identities) requires a DC 23 Investigation check. Changing identities takes 1 minute, as much a mental change as it is a change in clothing and manner.
Exceptional Resources. If given 24 hours Moon Knight can collect, purchase, or craft a high-quality item that grants him advantage to any specific skill or ability check, or modify his attacks to grant advantage when targeting a single, specific enemy. He may carry up to five skill resources at any one time, and one weapon resource.
Lunar Cape. When Moon Knight would fall he may instead choose to glide on his cape, traveling 5 feet horizontally for every 5 he feet falls. Even when he does not glide, he never takes damage from falling and always lands on his feet.
Lunar Power. During nights when the moon is out, Moon Knight gains a +2 bonus to all checks and rolls. When the moon is full, he gains advantage on all ability checks. During the day and on moonless knights, Moon Knight takes a -2 penalty to all rolls (except for damage).

Fortunately I had a vigilante nearby that was already well-suited for a lot of what Moon Knight is about so if you’ve got Mists of Akuma, you may recognize some bits in here. Either way it’s a good example of one of the differences between PF and 5E — you can build virtually anything in Pathfinder. Making him in DnD5e as a PC from the ground up would be impossible but there it is with PF, and on the other hand, *one* of these easily fits on a single page. Simulation or narrative folks, choose your poison! 😀