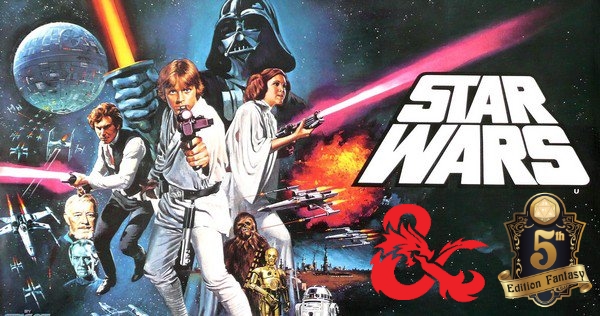 Hello and welcome to my website. I have a bunch of free character builds (Hyper Score Marvel has superheroes, there’s a big PDF of Street Fighter for D&D 5E, the current Warhammer 40k D&D 5E Hack series, then there’s handful of randomness like Afro Samurai, Venger, Aku, etc.) BUT that’s not what we’re here for today.

Today we are here for Star Wars.

First of all you are going to want the following three (free) things.

(For the most part they are reprinted in this post but still, they are handy and neat)

ASIDE The core d20 Star Wars game is great, it’s probably half-price or less at your local FLGS, and you will be able to easily convert a lot of it to D&D 5e. I encourage you to totally have fun with all the stuff I talk about in this blog post but if you see that book for sale somewhere buy it.

Also if you have not seen it one of its designers (Owen K.C. Stephens) has the best story ever regarding Star Wars RPGs that I have ever heard.

Also worth checking out: Tribality did a solid article on 5E Jedi. Props for Richard Howard, incidentally, who helped convert Hyper Score from Pathfinder to 5E (and has a great Alchemist 5E class you can snag if you are like me and want to play a glitterstims-addicted space doctor). I’d probably run both this *and* the Hyper Score bit to really ram in the superiority of Force users, but do as you will.

Martial classes only! If you want tech-powered spellcasters (instead of having technological items that duplicate spells) there’s the Unearthed Arcana artificer and the (free) Scrapper PDF from 2099 Wasteland.

The Star Wars – D&D 5th Edition Conversion document by fedorable1 is very cool and worth looking at if you haven’t yet (there’s definitely d20 Star Wars echoes in there). What I’m offering here is way shorter than theirs, but it’s definitely worth popping over to grab the races: https://www.scribd.com/doc/278947931/Star-Wars-D-D-5th-Edition-Conversion-PF.
EDIT: Apparently folks *hate* Scribd so I’ve pulled Dale Easterling’s Species chapter from the above document and dropped it into GoogleDrive –> https://docs.google.com/document/d/10Tqj0nVpGfA94GrAE_dDyfIYC_jHIAC0BqrTrhKkhqM/edit?usp=sharing
EDIT: While organizing ^^ someone found a better link to Dale’s entire book –> http://fedorable1.wixsite.com/btdpress/books 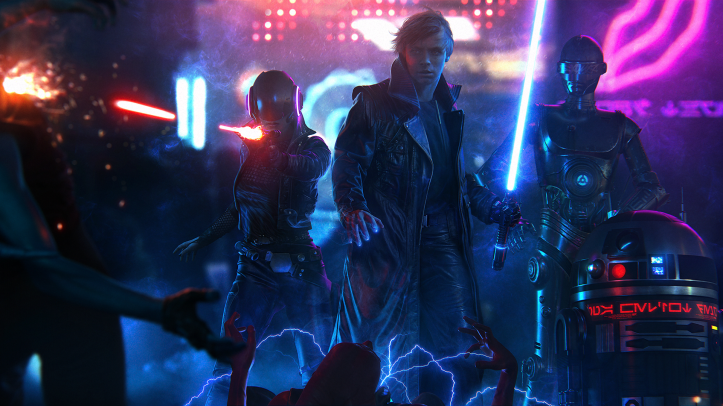 The Hyper Score system is what adds superheroes into the Hypercorps 2099 setting by adding on a rules template that overlays the existing ruleset (Paizo’s idea shamelessly taken from Mythic Adventures). We don’t need a ton of Hyper Score to get what we need for being a run of the mill Jedi and if you want to do a full on levels 1-20 Star Wars campaign, go buy the Hypercorps 2099 5E PDF. Otherwise you’re going to get some Apprentices and Padawans and to make sure we get the latter, I’m including a little bit more than the playtest document offers right here so lucky you (and you can just make a sith lord or dark jedi as you would a monster). 🙂

WHAT ARE THESE THINGS?

Once again, you will want the free Hypercorps 2099 5E Playtest for more concrete details but here’s some hard and fast rules for getting (using parallel hyper route) a Jedi Consular, Jedi Guardian, or Jedi Sentinel, a cybered out mercenary (using meganaut), or a highly skilled pilot/mechanic/woman-of-the-hour (using savant). These are all Route 1 suggestions and you should not feel at all bound to them–I suspect by Hyper Score 4 you’ll be ready to pick out Route 2 on your own anyway–but are predominantly meant to illustrate a basic dichotomy for the run-up to full jedi-ness (a parallel literally chooses their ability score/cantrips/spells so pick the ones you think fit best). 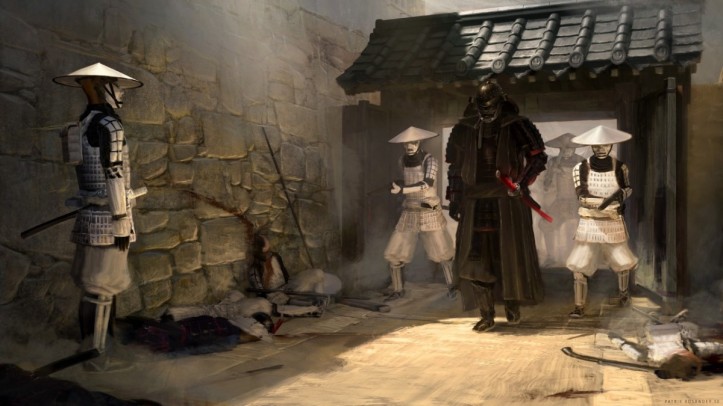 There’s a lot of cool things you can further incorporate into this (samuraiiiiiiiiii paladin oath jedi FTW) but we’re predominantly concerned with Haitoku or “fall from virtue” which is where we are getting into the Dark Side of the Force. The basic info on Haitoku/Dark Side is below, but for more information go grab the (again, free) Mists of Akuma Primer PDF!

Haitoku means “fall from virtue” and represents a character’s gradual embrace of dark methods, immoral ethics, and fel powers. Characters with a high Haitoku score do whatever is necessary to achieve their goals—endangering children and the infirm, sacrificing the lives of others, committing a settlement to bloody reprisal from a rival town, or even dooming a region by disrupting a powerful relic for their own gain—and it taints their soul. This severe disposition can be recognized by others who share a willingness to be cutthroat, and some truly embody their depravity to unlock powerful abilities beyond the ken of mortal beings.

Haitoku can be raised by committing evil acts using the Force as your tool to inflict death, destruction, and suffering. A character always has a number of levels of the misted condition equal to their Haitoku modifier.

Haitoku Checks. Haitoku checks can be used much like Wisdom, when how despicable a character is plays an impact on a social situation. Generally if the Intimidate skill is applicable, Haitoku may be used with it. The GM might also call for a Haitoku check in the following instances:

Misted is measured in eight levels. An effect can give a creature one or more levels of misted, as specified in the effect’s description. Creatures always have a minimum number of levels of misted condition equal to their Haitoku modifier.

This is on Kickstarter right now and you should totally go check it out (even if you are not down for the evil!), BUT, for Star Wars D&D 5E we only need Sin Points: 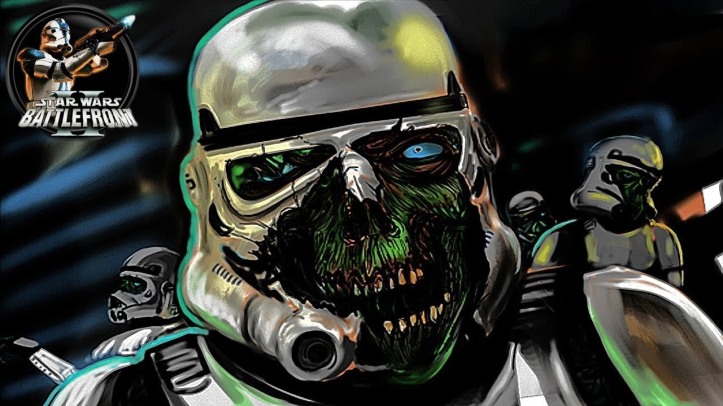 I spent a lot of time polishing, tweaking, and improving the custom-building weapons rules in D&D 5E and I simply cannot in good conscience share them here (that would be unfair to the 100+ people that backed the Kickstarter for it) but if you’re going full-in and do a complete Star Wars D&D 5E game I suggest you recommend it to the group if somebody has chosen to not be a jedi (it will make combat way more interesting for them although you could totally build lightsabers with it too). Oooh and we’ve got a bunch of vehicular rules in there (for Mad Max style stuff) that could easily be converted entirely to 3-D for space combat (take the gyrocopter, increase various values for flying through space, add in shields, ta-da).
Depending on how the GM wants to approach the Dark Side of the Force, the (free) rules for Radiation might be useful as well (tying Irradiated into Haitoku).

This item appears to be a longsword hilt. While grasping the hilt, you can use a Bonus Action to cause a blade of pure radiance to spring into existence, or make the blade disappear. While the blade exists, this magic sword has the Finesse property and deals 3d4 damage on a successful hit. A character with a Hyper Proficiency bonus of +0 or greater and proficiency with shortswords or longswords is proficient with the lightsaber.
You gain a +2 bonus to attack and damage rolls made with this weapon, which deals fire, force, and radiant damage instead of slashing damage. If you are a parallel, you increase the damage the lightsaber deals by 1d4 per point of Hyper Proficiency (to a maximum of 8d4 at Hyper Score 10).
The sword’s luminous blade emits bright light in a 15-foot radius and dim light for an additional 15 feet. The light is sunlight.

Gather up the few bits I haven’t reprinted from the freebie PDFs (full Hyper Routes and Hyper Traits), fill in the blanks above, paste it into a word document, print it out, and let me know how it plays! I’ve got the day off today so I think I’ll be giving it a shot on Roll 20 myself! 😀