Last week we had Vision and next we’ve got Hulk, then Thing, Rocket Raccoon, Emma Frost, Cyclops, Daredevil, Luke Cage, Iron Fist, Jessica Jones, Punisher, Mr. Fantastic, Human Torch, Doctor Doom, Invisible Woman, and Loki. More requests are always welcome however–I’ll get to them all eventually! Full cast so far is over yonder. It’s also worth noting that there are freebies for Hypercorps 2099 and if you are like “awww man I have to download something!” I’ve got some brief explanations of the Hyper Score system right here in the Star Wars D&D 5E Hack.

Somebody asked for Thanos but I say to thee nay—let’s do the Infinity Gauntlet instead! If you haven’t read File Off The Serial Numbers by Sean K. Reynolds go spend $2 now (you won’t regret it) because that’s what we’re doing for Thanos. 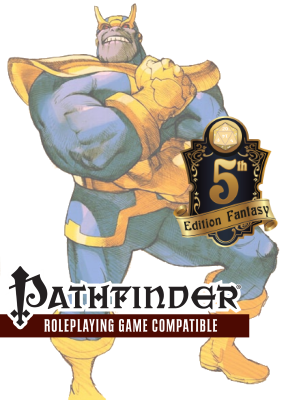 Take the statistics for a Pit Fiend and make the following changes:

Links to (free) Hyper Score promotional PDFs (Pathfinder, D&D 5E) that explain what a Hyper Score is, how it impacts a character sheet, and etc. 🙂 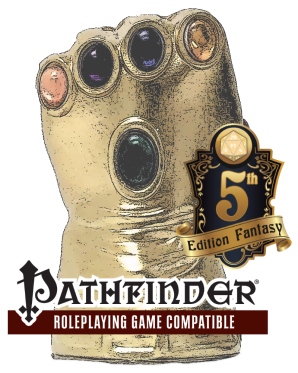 DESCRIPTION
This heavy metal gauntlet is made from a material similar to gold but far more lustrous and the power of the glove is palpable, making the air itself heavy.

The Infinity Gauntlet uses up your entire hands slot. You may not use another item that also uses the hands slot.

DESTRUCTION
There is no known way to destroy The Infinity Gauntlet without taking it to another universe where it is transformed into a completely mundane and ordinary gold gauntlet.

DESCRIPTION
No chipping, tarnishing, or wear of any kind can be seen on this invaluably perfect gemstone and you can feel the powerful energies contained inside just by looking upon the jewel.

These remarkable gemstones float in the air and must be within 3 feet of their owner to be of any use. When a character first acquires an Infinity Gem, they must hold it and then release it, whereupon it takes up a circling orbit 1d3 feet from her head. Thereafter, an Infinity Gem must be grasped or netted to separate it from its owner. The owner may voluntarily seize and stow a stone (to keep it safe while they sleep, for example), but they lose the benefits of the Infinity Gem during that time unless it is clenched in their fist. Infinity Gems have AC 30, 100 hit points, and hardness 20. The powers of each stone vary depending on its color and shape (see below).

DESTRUCTION
There is no known way to destroy an Infinity Gem without taking it to another universe where it is transformed into a completely mundane and ordinary jewel.

Wondrous item, artifact
When you use a bonus action to clench an Infinity Gem in your fist or an action to toss one of these jewels into the air, the gemstone orbits your head at a distance of 2 feet and confers a benefit to you. Thereafter, another creature must use an action to grasp or net the stone to separate it from you, either by making a successful attack roll against AC 26 or a successful DC 26 Dexterity (Acrobatics) check. You can use an action to seize and stow the stone, ending its effect.

An Infinity Gem has AC 26, 50 hit points, and resistance to all damage. It is considered to be an object that is being worn while it orbits your head. Unlike normal, an ability score increase from an Infinity Gem increases your maximum for that ability score by the same amount.