Before this post goes anywhere there’s two things folks should know–I’m not actually “in the office” right now and I won’t be for more than a week, so there isn’t a post going up next Friday (come back on 11/24).

The second thing is that Dan Abnett is fucking spectacular. He is far and away the person most responsible for getting me addicted to the grimdark future and I can’t say enough good things about his work. If for some awful reason nobody has exposed you to it yet, please, please go find a copy of one of the (many amazing) Gaunt’s Ghosts novels or something from Eisenhorn or (if you want what I felt was arguably a more compelling series because who doesn’t want a psychic casket protagonist?!) Ravenor or any of the anthologies with his work. You will not be disappointed.

PS: If last week you were like “wow Mists of Akuma Roll20 modules!” check it out because there are now 6 (including one that has versions in D&D 5E and Shadow of the Demon Lord) over on their marketplace. 😀

ON TO THE HACK!

Prerequisites: Intelligence 16, evil alignment
You know a number of Enuncia equal to half your proficiency bonus, selected from the list below. After uttering an Enuncia, any more uses of that Enuncia in the next 24 hours double their negative effects. Once you have learned one type of Enuncia, you may not select from that type again until you have learned at least one Enuncia from all other types. This feat may be selected multiple times.

Noun: Admordeo. As a reaction after you hit a living creature with a weapon attack that deals piercing or slashing damage, you hiss a word of bloodlust, dealing 6 points of damage to yourself. Your attack deals an additional amount of damage equal to half your proficiency bonus

Noun: Explivas. As a bonus action you spit out a word of primal malice that manifests into a wave of force, dealing 4 points of damage to yourself. Make a ranged attack roll against a creature within 30 feet. On a hit you deal 1d12 thunder damage plus your Strength modifier. On a critical hit, the creature is knocked prone.

Adjective: Anteactus. As an action, you utter a jibbering of syllables that pluck along the chords of fate, dealing 12 points of damage to yourself and bringing the energies of moments in the past to your senses. As long as you remain motionless, the events of the past reveal themselves to you:

Adjective: Praesens. As a bonus action, you whisper a questioning word from the void, dealing 10 points of damage to yourself, but in return you are gifted with glimpses of possible futures and likely outcomes. You have advantage on your next d20 roll.

Verb: Excaeco. As an action and bonus action, you pulverize your mouth to shout a potent word of command, dealin 20 points of damage to yourself. Choose a creature within 60 feet and make a Strength saving throw opposed by the target’s Charisma saving throw. On a success, you paralyze the creature until the beginning of your next turn.

Verb: Nilum. As an action, you utter a baffling word that muddles the senses, dealing 8 points of damage to yourself. Choose a creature within 30 feet and make a Wisdom saving throw opposed by the target’s Wisdom saving throw. On a success, you make the creature blind and deaf until the end of your next turn. By spending a bonus action and dealing 4 points of damage to yourself to continue uttering, you may extend the duration of the creature’s blindness and deafness by 1 round. 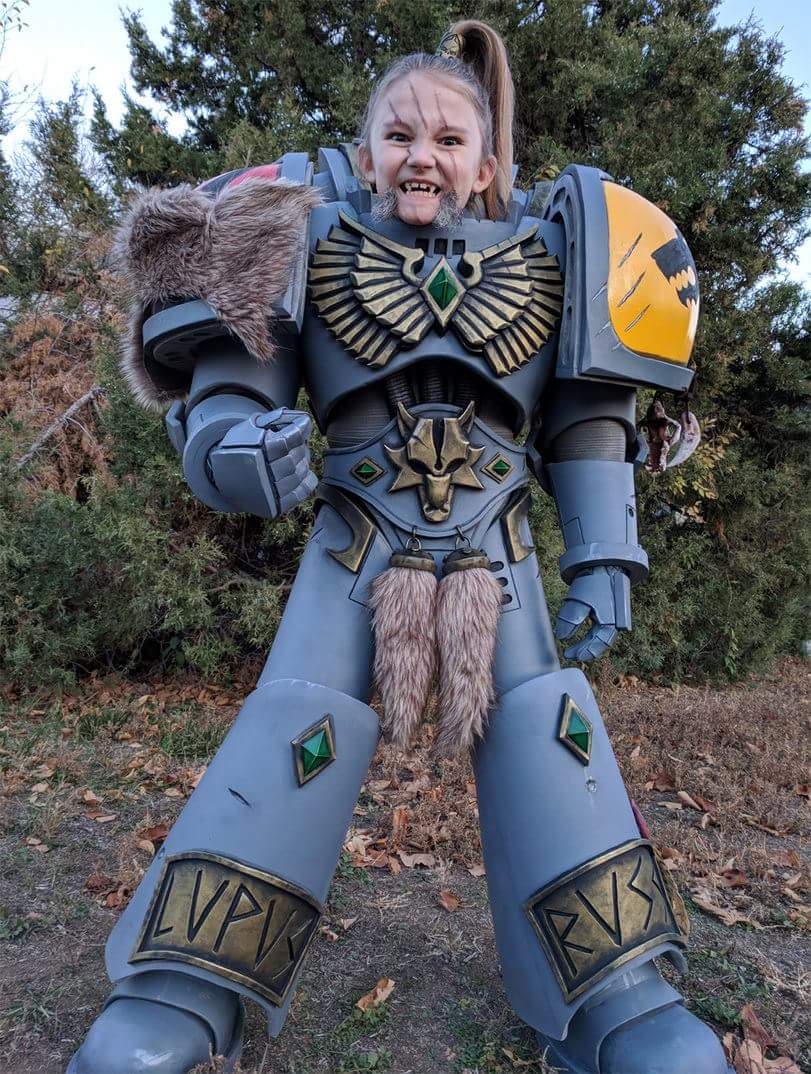 Ran into this picture and SUPER MAD PROPS on your amazing costume!
EMBRACE THE CANIS HELIX AND DESTROY YOUR ENEMIES!

The chaos template can be added to any living creature (in particular the space marine that appears in the next post!) It should be noted that this template means a creature has completely and irredeemably fallen, drinking deep from the Warp–a typical traitor space marine doesn’t need this, but if they’re a Veteran of the Long War it is definitely appropriate.