Welcome to Hyper Score Marvel (#28) where every week I use Hypercorps 2099 to put together an iconic hero or villain from the world’s most popular superhero universe! Unlike previous posts, this series is no longer dual-system and only for the Pathfinder Roleplaying Game (there’s lots of excellent free D&D 5E stuff, most notably the Warhammer 40k D&D 5E Hack or Street Fighter D&D 5E).

WTF is Mike doing?
Most of my week was putting NPCs and monsters through layout, and about 12 hours ago I finished the rough draft PDF of Book of Exalted Darkness–all 414 pages of it. If you take out the credits, OGL, and foreword that’s 411 pages. 4+1+1=6 with three numbers is 666. 😉 The next few days are bookmarks, the table of contents, and other little fixes but I am INCREDIBLY excited to put it into the printer and see what comes out. Speaking of, I just ordered four other print proofs (Shadow of the Demon Lord fans, sacrifice all the animals) because to take a break from that huge tome I was like “I’m a masochist! Let’s fix these two errored books and hey, why not get that other Mists of Akuma adventure (Feud Primordial) and something new for Pathfinder out into the world!”

BACK TO THE BLOG
Last time we had Jessica Jones and next we’ve got Mr. Fantastic, Human Torch, Doctor Doom, Invisible Woman, Loki, Mister Negative, Colossus, and Speedball. More requests are always welcome however—I’ll get to them all eventually! The full cast (as well as all my other statblocks) are easily accessible in big ol lists over on the index page and run the gamut from Spider-Man and the Venom Symbiote to Emma Frost. Also—there are free PDFs for Hypercorps 2099 (wherein you can get a look at how all these hyper abilities function).

NOTE: This is one of the more popular character builds and if you root about the Paizo forums/reddit/websites you can find several. I’m out to build him using the Hyper Score system (think Mythic Adventures but with some stimulants). 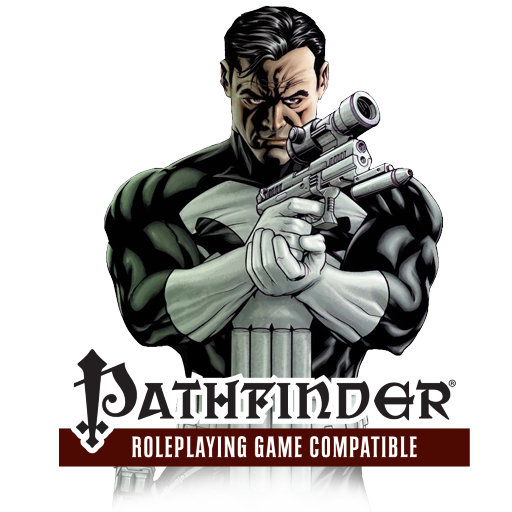 Frank here is effectively a melee weapon and if he’s sporting two guns (which he probably should be) then Sword and Pistol is always in effect, letting him fire away until nothing else nearby is moving. As it is he’s sporting six attacks a round which I feel is fine (12d6+18 – oy vey, now that’s punishment!) but remember that he’s got martial flexibility which you can use to snag Improved Two-Weapon Fighting (at least, I’d allow it so long as it’s only used in conjunction with flurries) for a seventh attack. I think most of the time his best bet is to go after Improved Critical and rely on making lots of attacks.

I also didn’t give him any magic items or hyper equipment aside from his weapons (which themselves are mundane, albeit mundane for modern/future) to keep this purer to cannon, but whatever you might spend on him should get spent on bracers of armor and a nice ring of protection to pump his AC up a bit (although he should be able to use Combat Expertise without fear of missing too often). Even so it’s still low and in comparison to a regular CR 14 monster, he pales in comparison in most categories–except for damage and accuracy, where Frank really shines. He’s still shooting at touch AC (or if you’re full-in for Hypercorps 2099, Bullet AC) so feel free to sprinkle some Deadly Aim into the attack array to pop the bullet fusillade into the “dear god what happened to Karl?”-range. 😀