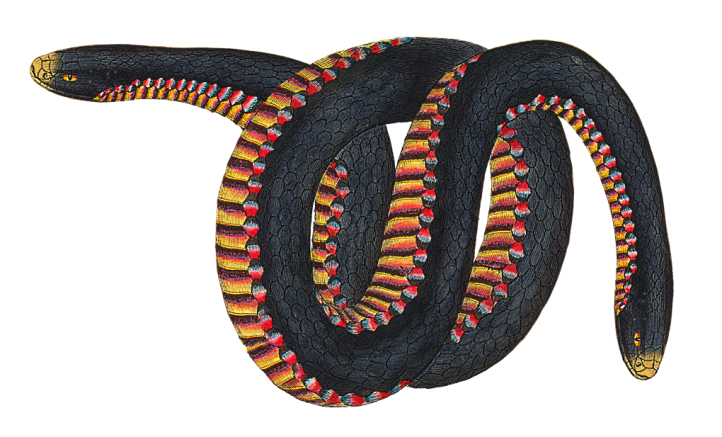 Dual Mind. The amphisbaena has two brains, so for all mind-affecting attacks it counts as two separate creatures. If a spell or effect can only affect one of the creature’s heads (such as a charm monster spell, which affects a single target) the unaffected head takes control of the entire body. In these situations the affected head becomes inert for combat purposes (losing its second bite attack), and the creature temporarily loses its Dual Reflexes feature (lowering its Initiative score by 4). Even if one head is charmed or dominated, the creature does not attack itself or split its attacks between its normal opponents and those chosen by its controller. In effect, mind-affecting attacks must affect both heads in order to achieve the normal result (casting two successful charm monster spells on the amphisbaena brings it fully under the control of the caster and allows it to use all of its features).
Keen Smell. The amphisbaena has advantage on Wisdom (Perception) checks that rely on smell.

REACTIONS
Dual Reflexes. The amphisbaena has advantage on initiative checks and can take two reactions each round.

An amphisbaena is a snake native to North Africa with a head on each end of its body.

An Intelligence (Nature) check reveals the following information: 8—Two-headed snakes called amphisbaenas are native to North Africa. They can crawl forward or backward, and both heads are poisonous.