The Book of Exalted Darkness (and do-gooder Book of Celestial Heroes and concentrated Book of True Evil) are out there and available in print! Somebody ordered 30 copies of it last week and I’m still freaking out.

So let’s see WHY somebody would do that! I mean there’s a tasty PDF preview you can download and the also free Vile Primer, but let’s dig in and take a look at one of my absolute favorite things in the book. The evil tomes, anyway (BoCH has its own class options based around goodness).

One of the reasons this stands out to me from the many vile options for villainous adventurers actually has a lot to do with the bookmaking process.  We were pretty late into the production of Book of Exalted Darkness when I got the inspiration for The Meat, but once it hit me I couldn’t abandon it–cannibalism just fits far too snugly with warlocks. On top of that I adore the idea of The Meat itself and it’s just the sort of dark, twisted thing that as a player I would embrace. That gnome with the saltshaker in this chapter’s flash fiction–I want to play that guy! ❤ ❤ ❤

The way I’ve arranged the book design process allows me a comparably huge degree of latitude that traditional RPG design houses just don’t have. When approaching layout if you’re a big company, the location of text (which page) and art assets are fixed by this point because you’ve got very, very hard numbers based on how much your off-set print run is going to cost you. Adding another two pages of content means more than just the writing, artwork, and the teams revolving around those two things–it also means more paper, more ink, more drying time, increased shipping weight, and a host of other added fees that will break the budget. I’m over here spinning damn near all of the plates however, and I can add two pages of awesome content without undue harm. All told the backers of the Book of Exalted Darkness were all charged an extra $0.6-0.07 or so for including The Meat. 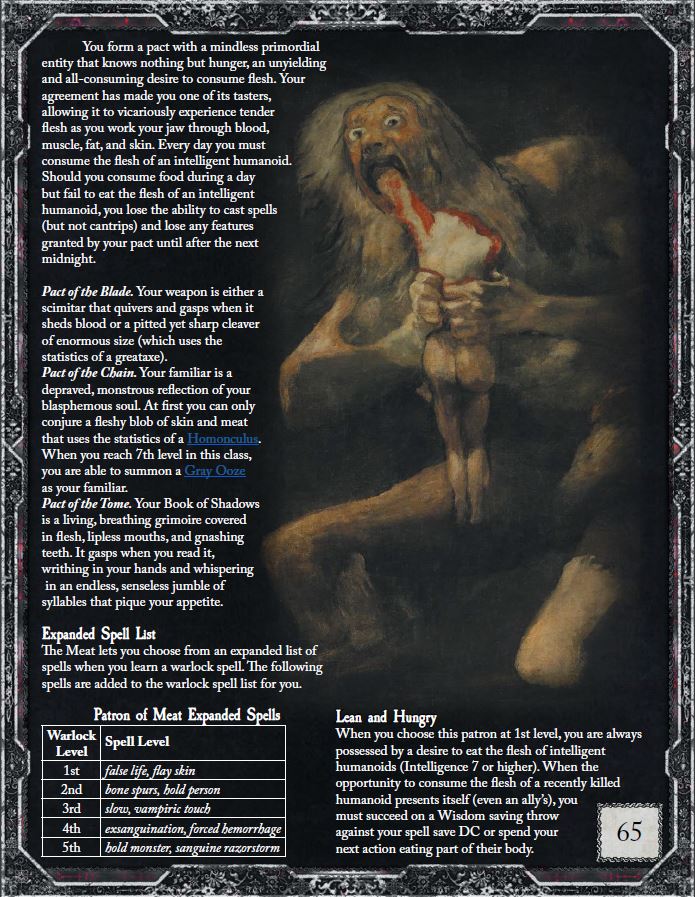 See that blue text in the page? Those are hyperlinks that take a PDF reader to 5eSRD.com to speed things up for players.

Past the initial concept and the suite of tasty new vile spells, the other big thing about The Meat that I love is the 14th level feature. Don’t get me wrong–they are all delicious–but pulling a Magneto-Wolverine on an enemy is too cool. First chance I get to play a warlock of The Meat, I’m saving its use until after the fight is over because can you imagine watching that happen to somebody and then not doing everything possible to avoid the same fate?

Edit: All that talk of blood magic without any more explanation of how that works–what’s up with that! Here’s the spell that definitely benefits the Meat Warlock the most in respect to his damage-reducing features (which are very pro-melee because I feel warlocks need that oomph to get into the thick of things), although it should be noted that aside from cantrips any spell from the vile school that inflicts damage does so with dice instead of a static number. 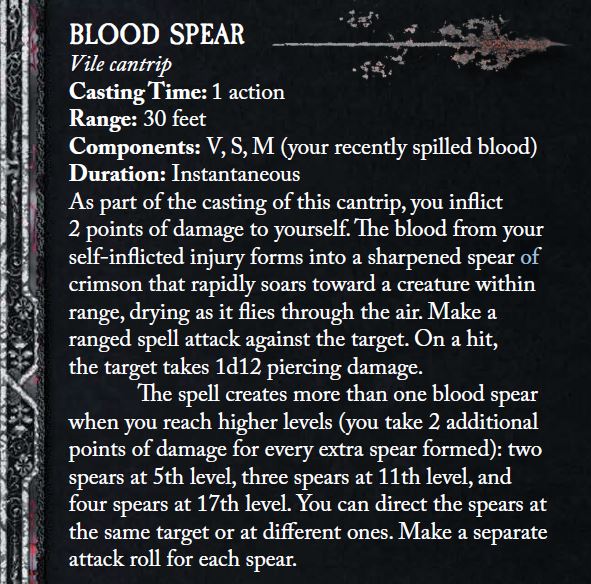 There are a lot of amazing things in Book of Exalted Darkness (and the cheaper, smaller, focused Book of True Evil) and I love them, I truly do. The heresy knight, the dark chi monks, the dark transformation prestige class (be a lich! Or a demon! Or a dragon! There’s like six options it’s crazy) Luis Loza so brilliantly put together, the Gray Knight anti-magic kick–these are all appealing but for me the head of the pack is The Meat, if for no other reason than that is a small, perfect example of what these books should bring to your game. Something despicably evil, touched by madness, delightfully engaging, and really, really fun to get into roleplaying.