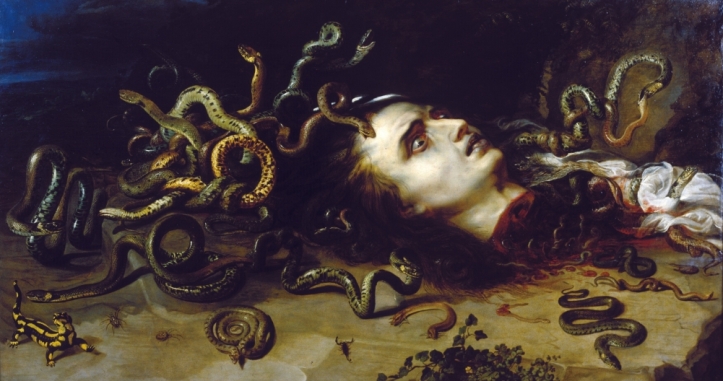 Euryale and Sthenno were the two immortal gorgons (using the original meaning of the word, not the armored smoke-breathing bull in the core rules), born of the obscure sea-god Phorcus and his monstrous sister Ceto. Hideous and evil, these two monsters took in the similar-looking transformed mortal Medusa, who was later killed by Perseus. In many tales the gorgons had wings; for winged gorgons, give them a fly speed 40 feet. In the Greek myths, Pegasus sprang from Medusa’s decapitated neck, and was an immortal winged horse (Zeus used Pegasus to carry his thunderbolts into battle). In the Argonauts playtest campaign, Sthenno was even more monstrous than her sister, with the torso of a beautiful woman and the lower body of a giant snake (Reaper Miniatures makes a miniature of this type of gorgon), but there is no reason why she can’t look like her sister. Sthenno likes to remain hidden while Euryale talks to potential foes, as her snaky body quickly informs any visiting heroes that something strange is afoot.

An Intelligence (History) check reveals the following information: 10—The three gorgons are hideous monster women whose faces are so ugly they turn any who look at them to stone. 15—Two of the gorgons are immortal; one was mortal, and slain by the hero Perseus.

The gorgon presented above is a weakened form of the normal creature, possibly as a result in the overall decline of mythic creatures in the world as civilization advanced (or as Euryale put it in the Argonauts playtest campaign, “We are not as immortal as we used to be”).

In an Argonauts campaign where the world’s magic is still strong and the vitality of myth in full force, use the core rules statistics for a medusa instead of the weaker version presented here, and consider adding resistance to bludgeoning, piercing, and slashing damage or Regeneration 5 to represent their full immortality.

False Oracle Guards. Use the core rules statistics for guard NPCs with AC increased by 1. These six men are lackluster soldiers who fell in with the old gorgons (Euryale and Sthenno) who promised them gold in exchange for swearing on the Styx that they would serve the monsters loyally. Their arms (longsword, shortspear, and 2 javelins) and armor (breastplate and large steel shield) are ill-kept and dirty, and they are from many city-states, having put aside their differences in the name of greed. These men play a part in the sample Argonauts campaign presented in Chapter 7: Running the Game of The New Argonauts. They use simple military tactics, trying to flank opponents without getting too far from the entrance to the Oracle’s cave.

An Intelligence (History) check reveals the following information: 8—The Oracle is said to have loyal men as guards as well as a great snake that protects her.