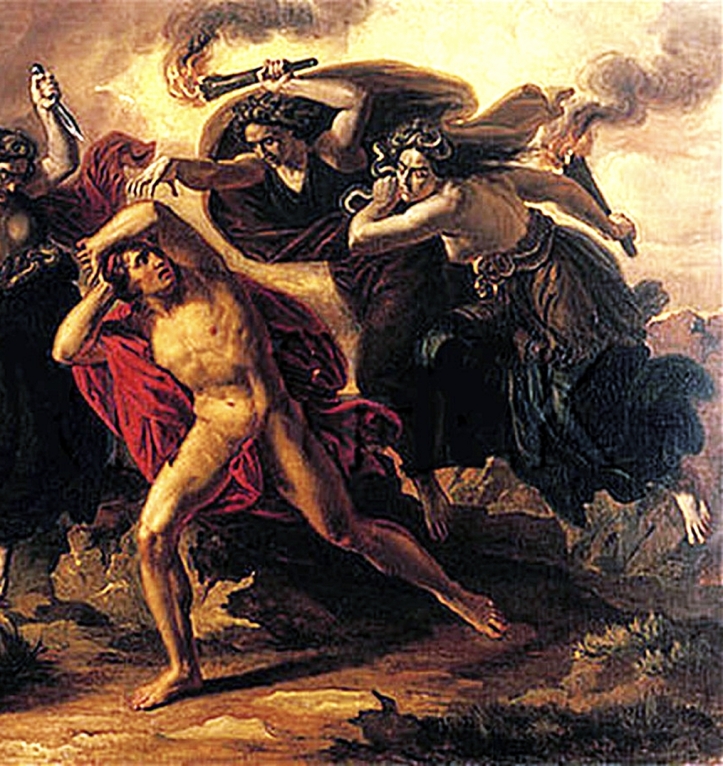 Ageless. The Furies cannot suffer from frailty of old age, die from old age, or be aged magically.
Kindly Punishment. The Furies are tasked with punishing the guilty, not with murder. If they so choose, none of their attacks deal enough damage to kill their target, though the target can still be knocked unconscious due to the damage and suffers the pain of the attacks normally even if they inflict no damage.
Magic Resistance. The Furies have advantage on saving throws against spells and other magical effects.
Track the Guilty. The Furies are given the power to sense their chosen prey and can track them at any distance. This is the equivalent of an 8th-level spell for the purposes of evading or blocking the Furies’ ability to track in this manner.

The Erinyes (Alecto “Unceasing One,” Megaira “She Who Holds a Grudge,” and Tisiphone “Avenger of Murder”), are three fierce-looking winged women with snakes for hair. Created when the blood from castrated Uranos fell upon Gaea, they exist for vengeance and retribution, particularly for crimes of children against their parents. Also known as “the Kindly Ones,” the Erinyes beat their prey with scourges (whips that deal normal damage and can harm creatures with natural armor) and snakes, driving them to madness and despair until the ritual of purification cleansed them of their sins. Because they are technically minor goddesses, it is possible that mortals cannot kill them, or they are reborn in Hades to serve again if somehow killed.

As embodiments of vengeance for horrible crimes, erinyes are dauntless and gleefully wade into combat with their weapons. If attacked by something other than their prey, an erinyes is likely to lash at it once or twice as a deterrent so they can deal with their prey, but turn on attackers who persist, as all children are guilty of some crime against their parents (no matter how small or petty) and thus deserve punishment if prompted.

An Intelligence (History) check reveals the following information: 8—The erinyes are minor goddesses or spirits of punishment, usually for crimes by children against their parents. 13—They beat their prey with scourges as a ritual of purification cleans the victims of their sins against mortals and the gods. 18—They were born when Cronus castrated Uranos and the sky-god’s blood fell on Gaea. They may be immortal.