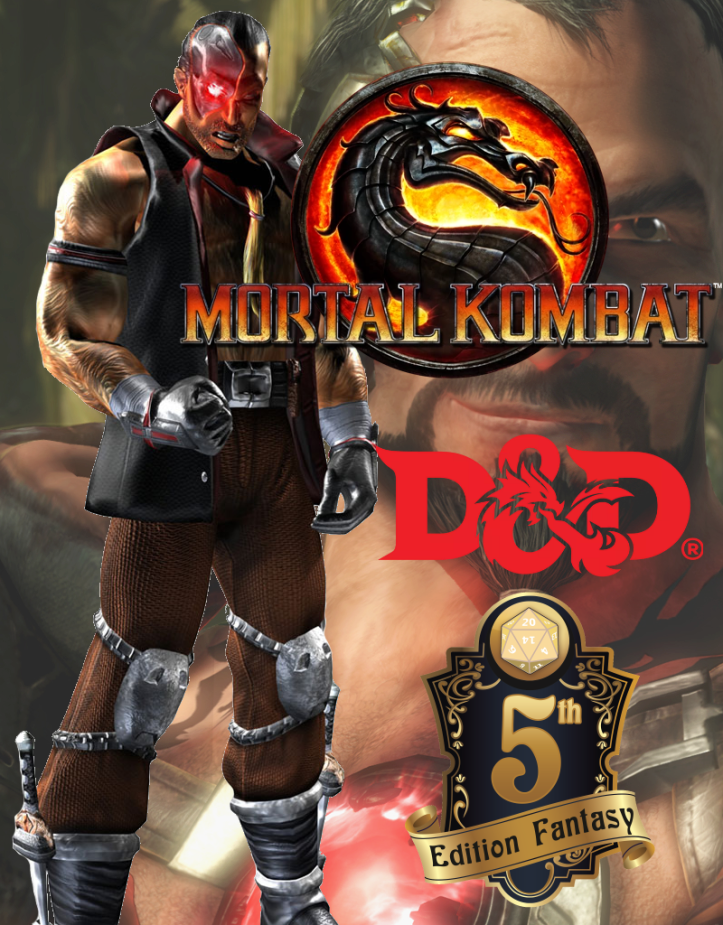 Cunning Action (1/turn). Kano can take a bonus action to take the Dash, Disengage, Hide or Use an Object action, make a Dexterity (Sleight of Hand) check, or use thieves’ tools to disarm a trap or open a lock.

Electrolens Laser. Kano has an eyepiece that grants him darkvision 60 feet and grants him a special attack (see below). It has 20 hit points an an AC of 24.

High Haitoku. Kano gains a +10 ft. bonus to speed in combat, +1 to Strength and Dexterity, he ignores the first 3 points of damage from attacks and spells, but has a visible physical mutation (scarring and a palpable air of malevolence), and suffers disadvantage on Dignity ability checks and saving throws.

Second-Story Work. Climbing does not cost Kano extra movement. When he makes a running jump, the distance he covers increases by 5 feet.

Stance of the Striking Serpent (3). Kano’s unarmed strikes deal an additional 1d8 piercing damage, he has advantage on Dexterity (Acrobatics) checks, checks and saves to avoid the prone condition, and creatures are at disadvantage to resist his attempts to grant them the prone condition.

Supreme Sneak. Kano has advantage on a Dexterity (Stealth) check if he moves no more than 20 feet on the same turn.

Unarmed Savant. Kano’s unarmed strike damage increases by one step (to 1d8) due to his soburi heritage and he gains proficiency in the Athletics skill.

ACTIONS
Extra Attack. Kano attacks twice. In addition, when Kano uses the Attack action with an unarmed strike or a monk weapon on his turn, he can make one unarmed strike as a bonus action.

Electrolens Laser (Recharge 4-6). As an action, Kano unleashes a blast of powerful energy from his electrolens at a creature he can see within 100 feet. He makes a ranged attack roll with a +10 bonus to hit and on a hit deals 32 (5d12) fire damage

REACTIONS
Deflect Missiles. Kano can use his reaction to deflect or catch the missile when he is hit by a ranged weapon attack. When he does so, the damage he takes from the attack is reduced by 1d10+11. When the damage is reduced to 0, he can catch the missile if it is small enough for him to hold in one hand and he has at least one hand free. If he catches a missile in this way, Kano can spend 1 ki point to make a ranged attack with the weapon or piece of ammunition he just caught, as part of the same reaction (+10 to hit, range 20/60 ft., 1d8+5 damage).

Slow Fall. Kano can use his reaction when he falls to reduce any falling damage he takes by 30.

Uncanny Dodge. When an attacker Kano can see hits him with an attack, he can use his reaction to halve the attack’s damage against him.

Uncommon; +1d4 Haitoku
In addition to functioning as a regular electrolens (Mists of Akuma page 239) you can use an action to unleash a fiery laser at a creature you can see within 100 feet. On a hit, you deal 1d12 fire damage per point of proficiency bonus you possess. Once you have used this feature, at the start of each turn roll 1d6 to recharge it. On a 4, 5, or 6, the electrolens laser recharges. While it is recharging, you do not gain darkvision from your augmetic.