Dust off your gaming thumbs people! Street Fighter D&D 5E is done and what lay ahead is arguably its only true competitor among fighters in the golden age of video games: MORTAL KOMBAT D&D 5E (yes, all caps, every time). In this series I’ve put together RAW builds using Mists of Akuma to supplement the core rules–with the litany of martial arts stances (playtest versions here) there’s a lot that can be done, and what can’t will get items to bridge the gap. 😀

Everybody’s favorite bicycle-kicking hero is an easy fit as an open hand monk and the Mists of Akuma bits only really play into some extra damage–otherwise he’s pretty close to core RAW. 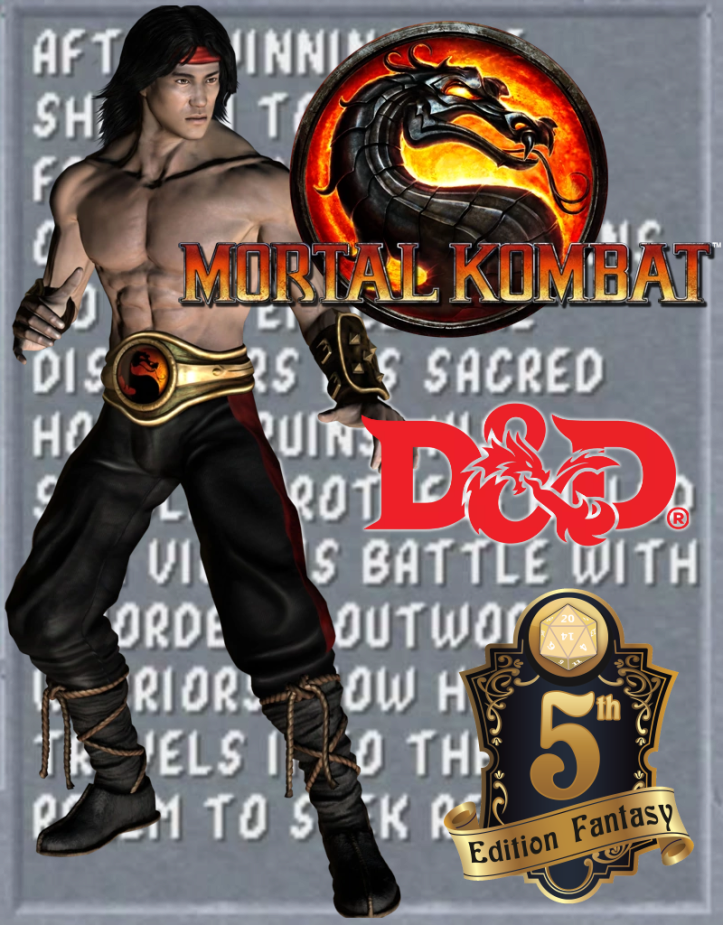 Feat: Magic Initiate. Liu Kang knows the produce flame and resistance cantrips. He can cast the jump spell once with this trait, regaining the ability to do so when he finishes a long rest. Wisdom is his spellcasting ability for these spells (spell save DC 16, spell attack +8).

Open Hand Technique. Whenever Liu Kang hits a creature with one of the attacks granted by his Flurry of Blows, he can impose one of the following effects on that target:

Stance of the Striking Serpent (3). Liu Kang’s unarmed strikes deal an additional 1d8 piercing damage, he has advantage on Dexterity (Acrobatics) checks, checks and saves to avoid the prone condition, and creatures are at disadvantage to resist his attempts to grant them the prone condition.

Stillness of Mind. Liu Kang can use his action to end one effect on himself that is causing him to be charmed or frightened.

Unarmed Savant. Liu Kang’s unarmed strike damage increases by one step (to 1d10) due to his soburi heritage and he gains proficiency in the Athletics skill.

ACTIONS
Extra Attack. Liu Kang attacks twice. In addition, when Liu Kang uses the Attack action with an unarmed strike or a monk weapon on his turn, he can make one unarmed strike as a bonus action.

REACTIONS
Deflect Missiles. Liu Kang can use his reaction to deflect or catch the missile when he is hit by a ranged weapon attack. When he does so, the damage he takes from the attack is reduced by 1d10+20. When the damage is reduced to 0, he can catch the missile if it is small enough for him to hold in one hand and he has at least one hand free. If he catches a missile in this way, Liu Kang can spend 1 ki point to make a ranged attack with the weapon or piece of ammunition he just caught, as part of the same reaction (+9 to hit, range 20/60 ft., 1d10+4 damage).

Slow Fall. Liu Kang can use his reaction when he falls to reduce any falling damage he takes by 80.