I struggled a bit with what to make Shang-Tsung and then slapped my forehead–OBVIOUSLY he’s a shadow sorcerer! That requires reskinning his Hound of Ill Omen feature to be defeated warriors he’s captured the souls of but otherwise he’s RAW certified.

Personal experience has taught me that Shang-Tsung here is a *perfect* fit for Soburin. 😉 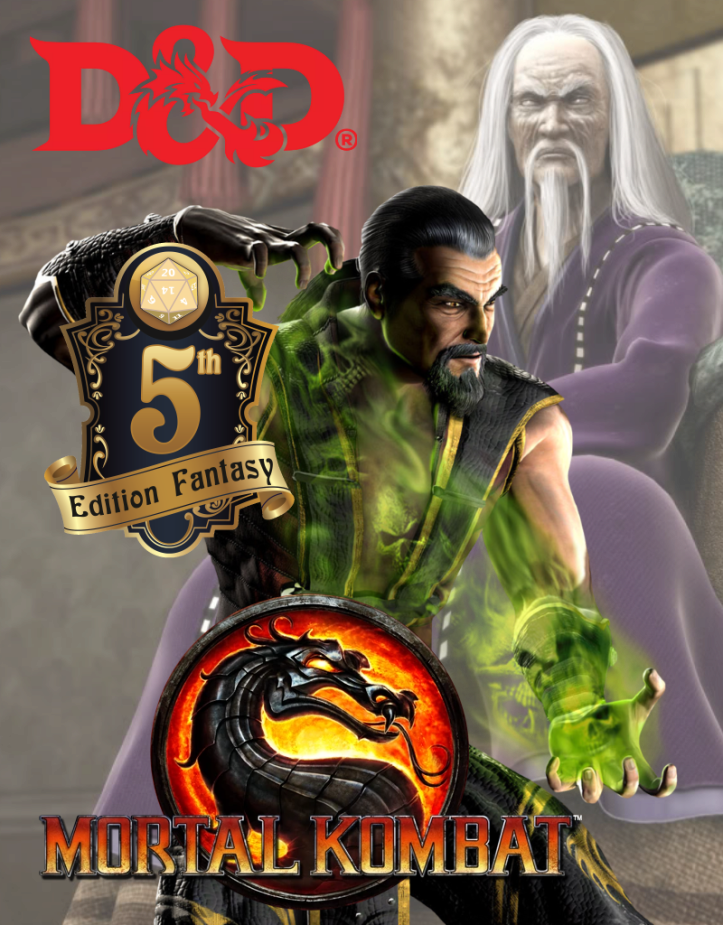 High Haitoku. Shang-Tsung gains a +10 ft. bonus to speed in combat, +1 to Dexterity and Constitution, he ignores the first 3 points of damage from attacks and spells, but has a visible physical mutation (radiating evil), and suffers disadvantage on Dignity ability checks and saving throws.

Eyes of the Dark. Shang-Tsung can cast darkness by spending 1 sorcery point. He can see through any darkness spell he casts using this ability.

Hound of Ill Omen. As a bonus action, Shang-Tsung can spend 3 sorcery points to summon a hound of ill omen (which takes the shape of a Medium-sized humanoid martial artist with the same statistics) to target one creature he can see. The hound uses a dire wolf’s statistics with the following changes:

The hound appears in an unoccupied space of Shang-Tsung’s choice within 30 feet of the target. Roll initiative for the hound. On its turn, it can move only toward its target by the most direct route, and it can use its action only to attack its target. The hound makes opportunity attacks, but only against its target.
Additionally, the target has disadvantage on all saving throws against Shang-Tsung’s spells while the hound is within 5 feet of it.
The hound disappears if reduced to 0 hit points, if its target is reduced to 0 hit points, or after 5 minutes.

Metamagic: Empowered Spell. When Shang-Tsung rolls damage for a spell, he can spend 1 sorcery point to reroll up to 3 of the damage dice. He must use the new rolls. Shang-Tsung can use Empowered Spell even if he has already used a different Metamagic option during the casting of the spell.

Metamagic: Quickened Spell. When Shang-Tsung casts a spell that has a casting time of 1 action, he can spend 2 sorcery points to change the casting time to 1 bonus action for this casting.

Metamatic: Twinned Spell. When Shang-Tsung casts a spell that targets only one creature and doesn’t have a range of self, they can spend a number of sorcery points equal to the spell’s level to target a second creature in range with the same spell (1 sorcery point if the spell is a cantrip). To be eligible for Twinned Spell, a spell must be incapable of targeting more than one creature at the spell’s current level.

Spellcasting. Shang-Tsung is a 14th-level spellcaster that uses Charisma as his spellcasting ability (spell save DC 17; +9 to hit with spell attacks). Shang-Tsung knows the following spells from the sorcerer’s spell list:

Stance of the Striking Serpent (2). Shang-Tsung’s unarmed strikes deal an extra 1d6 piercing damage (this does not multiply on a critical hit), he has advantage on Dexterity (Acrobatics) checks, checks and saves to avoid the prone condition, and creatures are at disadvantage to resist his attempts to grant them the prone condition.

Stance of the Waning Moon (2). Shang-Tsung’s unarmed strikes deal an extra 1d6 necrotic damage (this does not multiply on a critical hit) and he has resistance to necrotic damage.

Strength of the Grave (1/long rest). Whenever damage reduces Shang-Tsung to 0 hit points, he can make a Constitution saving throw (DC 5 + the damage taken). On a success, he instead drops to 1 hit point. Shang-Tsung cannot use this feature if he is reduced to 0 hit points by radiant damage or by a critical hit.

Unarmed Savant. Shang-Tsung’s unarmed strike damage increases by one step (to 1d8) due to his soburi heritage and he gains proficiency in the Athletics skill.

REACTIONS
Deflect Missiles. Shang-Tsung can use his reaction to deflect or catch the missile when he is hit by a ranged weapon attack. When he does so, the damage he takes from the attack is reduced by 1d10+9. When the damage is reduced to 0, he can catch the missile if it is small enough for him to hold in one hand and he has at least one hand free. If he catches a missile in this way, Shang-Tsung can spend 1 ki point to make a ranged attack with the weapon or piece of ammunition he just caught, as part of the same reaction (+10 to hit, range 20/60 ft., 1d8+4 damage).

Slow Fall. Shang-Tsung can use his reaction when he falls to reduce any falling damage he takes by 30.