Unlike everything else in his statblock there’s no feat or feature or anything giving Baraka a bite attack. He’s definitely got one though and since it’ll always be on the sidelines because of his sword arms, it’s included here for the sake of completeness (to the detriment of RAW). I’ve also toned down his sword arms (no extra damage from vibrating and such) so he can still have use of his hands. 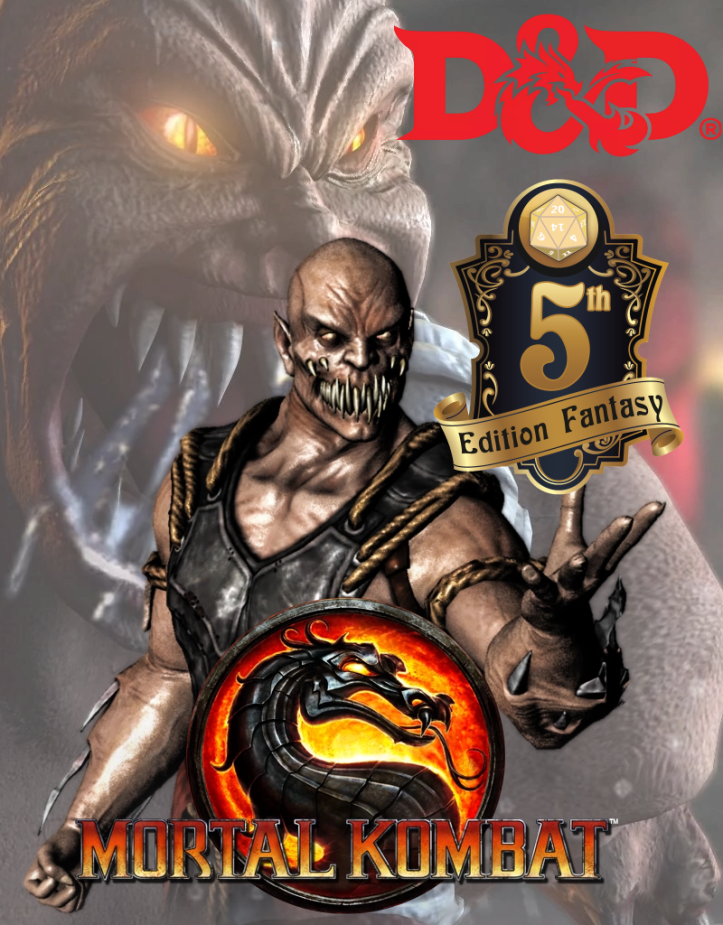 Action Surge (1/short rest). On his turn, Baraka can take an additional action on top of his regular action and a possible bonus action.

Combat Superiority (5d10). Baraka knows the following maneuvers. He can use only one maneuver per attack. A superiority die is expended when Baraka uses a maneuver. He regains all of his expended superiority dice when he finishes a short or long rest.

Danger Sense. Baraka has advantage on Dexterity saving throws against effects that he can see, such as traps and spells. To gain this benefit, he can’t be blinded, deafened, or incapacitated.

Indomitable (2/long rest). Baraka can reroll a saving throw that he failed. If he does so, he must use the new roll.

Know Your Enemy. If Baraka spends 1 minute observing or interacting with another creature outside of combat, he can learn certain information about its capabilities compared to his own. The GM allows Baraka to know if the creature is of equal, superior, or inferior in regard to two of the following characteristics of Baraka’s choice: Strength score, Dexterity score, Constitution score, Armor Class, current hit points, total class levels (if any), fighter class levels (if any).

Magical Savant. Baraka knows the booming blade cantrip (spell save DC 15) and has proficiency in Arcana.

Middle-High Haitoku. Baraka gains a +10 ft. bonus to speed in combat and +1 to Strength and Constitution, but has a visible physical mutation (his teeth are a maw of fangs) and suffers disadvantage on Dignity ability checks and saving throws.

Rage (2/long rest). On his turn, Baraka can enter a rage as a bonus action. While raging, he gains the following benefits if he isn’t wearing heavy armor:

His rage lasts for 1 minute. It ends early if Baraka is knocked unconscious or if his turn ends and he hasn’t attacked a hostile creature since his last turn or taken damage since then. Baraka can also end his rage on his turn as a bonus action.

Reckless Attack. When Baraka makes his first attack on his turn, he can decide to attack recklessly. Doing so gives him advantage on melee weapon attack rolls using Strength during this turn, but attack rolls against him have advantage until his next turn.

Second Wind (1/short rest). On his turn, Baraka can use a bonus action to regain 1d10+14 hit points.

Stance of the Wicked Oni (1). Baraka’s unarmed strikes deal an extra 1d6 damage to humanoids (this damage is not multiplied on a critical hit.) By spending a bonus action, Baraka can grant a creature that can see him the frightened condition for 5 rounds. A creature that succeeds on a DC 16 Wisdom saving throw made at the end of each of its turns negates this condition. Once a creature has been frightened by Baraka’s oni stance, it cannot be frightened by it again for 24 hours.

Sword Arm Augmetics (AC 24, 40 hit points each). Baraka’s sword arms are unable to vibrate but they emerge from the base of his forearms, allowing him limited use of his hands.

ACTIONS
Extra Attack (2). Baraka attacks three times and adds his Dexterity modifier to his damage rolls when he uses a bonus action to attack a fourth time (with two-weapon fighting; included in his statistics).