This was another really easy build to keep to Mists of Akuma RAW. Note that this assumes he’s spent more money than the other characters but the same character build could be achieved with the bushibot fighter archetype (to find a middle ground drop Athletic, drop Con by 1, drop Tough to lower hit points, limit all maneuvers and combat superiority dice to what he can pick up with two feats). That however won’t be as fun for GMs to use as a single combatant arrayed against the party (assuming he’s not appearing alongside Sonya Blade of course). 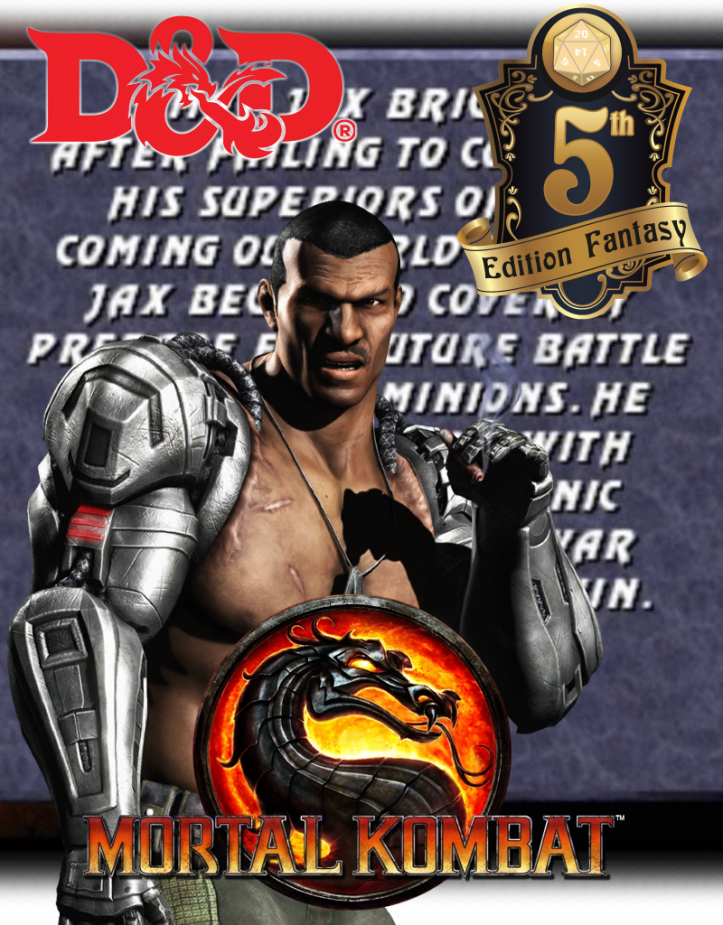 Action Surge (1/short rest). On his turn, Jax can take an additional action on top of his regular action and a possible bonus action.

Combat Superiority (5d10). Jax knows the following maneuvers. He can use only one maneuver per attack. A superiority die is expended when Jax uses a maneuver. He regains all of his expended superiority dice when he finishes a short or long rest.

Feat: Athlete. Climbing doesn’t cost Jax extra movement, when he is prone standing up uses only 5 feet of his movement, and he can make a running long jump or a running high jump after moving only 5 feet on foot (rather than 10 feet).

Indomitable (2/long rest). Jax can reroll a saving throw that he failed. If he does so, he must use the new roll.

Know Your Enemy. If Jax spends 1 minute observing or interacting with another creature outside of combat, he can learn certain information about its capabilities compared to his own. The GM allows Jax to know if the creature is of equal, superior, or inferior in regard to two of the following characteristics of Jax’s choice: Strength score, Dexterity score, Constitution score, Armor Class, current hit points, total class levels (if any), fighter class levels (if any).

Stance of the Stout Boar (3). Jax’s unarmed strikes deal an additional 1d8 bludgeoning damage, he may ignore nonmagical difficult terrain or terrain movement costs (such as from climbing or swimming) so long as all his movement is in a straight line and ends with him making a melee weapon attack, he has advantage on saving throws against effects or spells that would cause him to move, and he gains resistance to bludgeoning damage.

Steam Arm Augmetics (AC 24, 30 hit points each). Jax has two steam arms. Each increases his Strength by 2 (and his maximum Strength by 2) and make his unarmed strike damage 1d6.

Unarmed Savant. Jax’s unarmed strike damage increases by one step (to 1d8) due to his soburi heritage and he gains proficiency in the Athletics skill.

ACTIONS
Extra Attack (2). Jax attacks three times and adds his Strength modifier to his damage rolls when he uses a bonus action to attack a fourth time (with two-weapon fighting; included in his statistics).