Like all the other ninja kombatants, Mileena fit in like a glove–with the exception of her bite, added in to match up with Baraka and largely just for flavor. 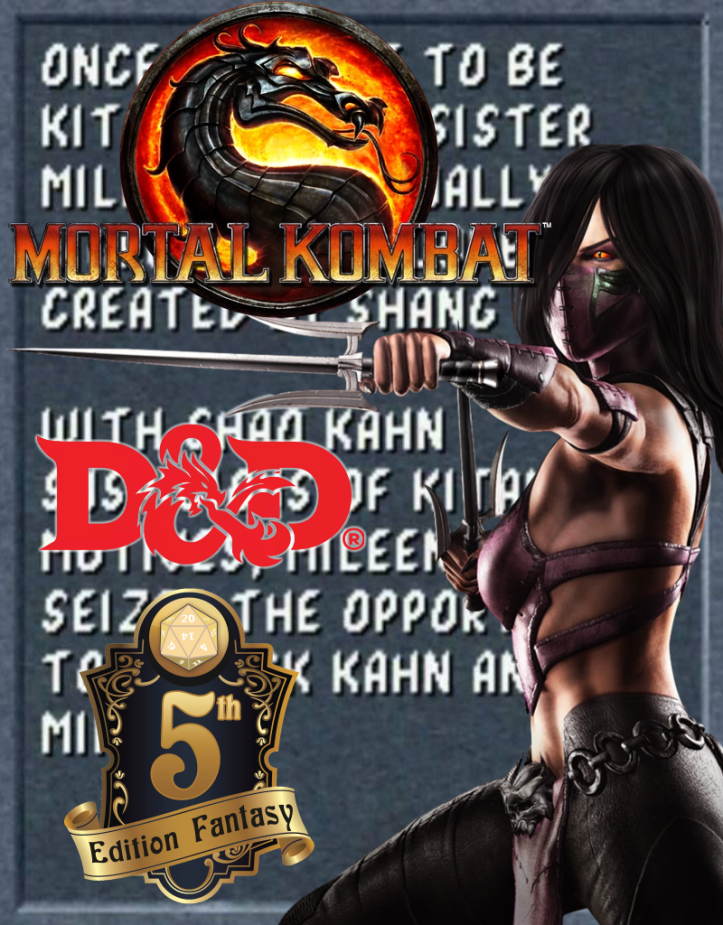 Basic Ninjutsu. Mileena can throw three kunai or shuriken when she takes the Attack action and she has advantage on checks made to create or maintain a disguise.

Middle-High Haitoku. Mileena gains a +10 ft. bonus to speed in combat and +1 to Strength and Constitution, but has a visible physical mutation (her teeth are a maw of fangs) and suffers disadvantage on Dignity ability checks and saving throws.

Ninjutsu Novice. Mileena has advantage on Dexterity (Stealth) checks, is able to run across any surface (regardless of whether or not it would support her weight, so long as she ends on a square she is able to stand on), and triples the distance of any jumps she makes.

Stance of the Striking Serpent (2). Mileena’s unarmed strikes deal an extra 1d6 piercing damage (this does not multiply on a critical hit), she has advantage on Dexterity (Acrobatics) checks, checks and saves to avoid the prone condition, and creatures are at disadvantage to resist her attempts to grant them the prone condition.

Stance of the Wicked Oni (2). Mileena’s unarmed strikes deal an extra 1d8 damage to humanoids (this damage is not multiplied on a critical hit.) By spending a bonus action, Mileena can grant a creature that can see her the frightened condition for 5 rounds. A creature that succeeds on a DC 16 Wisdom saving throw made at the end of each of its turns negates this condition. Once a creature has been frightened by Mileena’s oni stance, it cannot be frightened by it again for 24 hours. In addition, Mileena has advantage on saving throws made to resist the abilities and spells of oni.

Unarmed Savant. Mileena’s unarmed strike damage increases by one step (to 1d8) due to her soburi heritage and she gains proficiency in the Athletics skill.

Enchanted Sai. Melee or Ranged Weapon Attack: +9 to hit, reach 5 ft. or range 20/60 ft., one target. Hit: 8 (1d8+4) magical bludgeoning slashing plus 3 (1d6) piercing damage and if the target is a humanoid an extra 4 (1d8) piercing damage (this extra piercing damage does not multiply on a critical hit). If thrown, the sai returns to Mileena’s hand at the end of her turn.

REACTIONS
Deflect Missiles. Mileena can use her reaction to deflect or catch the missile when she is hit by a ranged weapon attack. When she does so, the damage she takes from the attack is reduced by 1d10+9. When the damage is reduced to 0, she can catch the missile if it is small enough for her to hold in one hand and she has at least one hand free. If she catches a missile in this way, Mileena can spend 1 ki point to make a ranged attack with the weapon or piece of ammunition she just caught, as part of the same reaction (+8 to hit, range 20/60 ft., 1d8+3 damage).

Slow Fall. Mileena can use her reaction when she falls to reduce any falling damage she takes by 30.

Uncanny Dodge. When an attacker Mileena can see hits her with an attack, she can use her reaction to halve the attack’s damage against her.