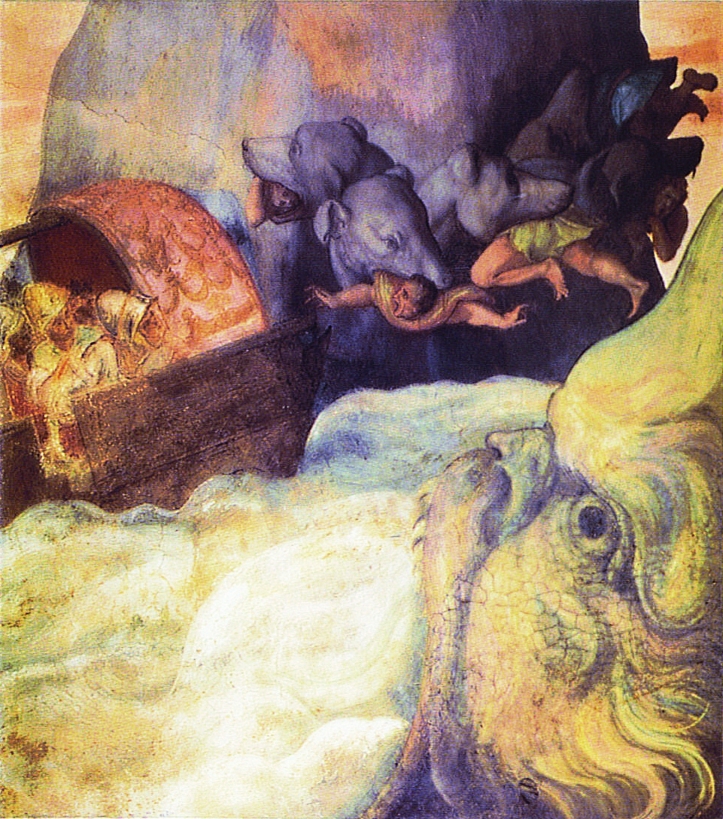 Ageless. Scylla cannot suffer from frailty of old age, die from old age, or be aged magically.
Pounce. If Scylla moves at least 20 feet straight toward a creature and then hits it with a bite attack on the same turn, that target must succeed on a DC 15 Strength saving throw or be knocked prone. If the target is prone, scylla can make one bite attack against it as a bonus action.

The creature Scylla was once a beautiful human woman, daughter of a rivergod. She was loved by a man named Glaucon, who spurned Circe’s affections to pursue Scylla. In revenge, Circe poisoned the waters of Scylla’s favorite bathing pool with foul magic, and when Scylla went to bathe herself, the submerged portion of her body transformed into six barking dogs and a monstrous snake tail. Thereafter she lived in a seaside cave, living on fish, dolphins, and whatever sailors she managed to snatch from passing ships.

Scylla cares little for fighting and only attacks because she is hungry. She prefers to grapple one or more creatures with her improved grab ability, then retreat. If she fails to grab anyone with her first a􀄴acks, she tries again, and if those fail she retreats to wait for easier prey.

An Intelligence (History) check reveals the following information: 9—Scylla is a horrible female monster with six dogs and a snake tail instead of a lower body. She devours sailors whose ships come to close to her cave. 14—Scylla used to be human but was transformed by a jealous sorceress. When she attacks a ship, each of her six dog heads snatches a sailor, which she drags back to her lair to devour.