If you somehow have not seen it yet, Bigmouth on Netflix is f#$%ing brilliant and this season they’ve introduced a great new character called the Shame Wizard. Milady and I are about halfway through season two so I may tweak this after we’ve finished it but until then please, by all means, indignify your wretched selves by indulging in the humiliating arcane arts of this most revealing of NPCs! 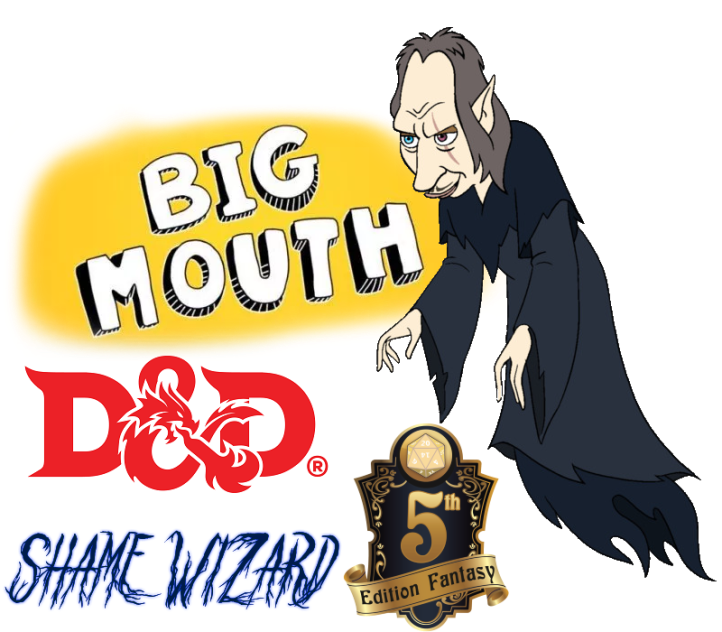 Amorphous. The Shame Wizard can move through a space as narrow as 1 inch wide without squeezing.

Incorporeal Movement. The Shame Wizard can move through other creatures and objects as if they were difficult terrain. He takes 5 (1d10) force damage if he ends his turn inside an object.

Shadow Step. The Shame Wizard magically teleports up to 60 feet to an unoccupied space of dim light or darkness that he can see.

Shadow Stealth. While in dim light or darkness, the Shame Wizard can take the Hide action as a bonus action.

Etherealness. The Shame Wizard enters the Ethereal Plane from the Material Plane, or vice versa. He is visible on the Material Plane while he is in the Border Ethereal, and vice versa, yet he can’t affect or be affected by anything on the other plane.

Willful Self-Deprecation. Each creature within 60 feet of the Shame Wizard that can see him must succeed on a DC 14 Charisma saving throw or be stunned for 1d4 rounds as it contemplates the ethics of its behavior and actions, then frightened for 1 minute afterwards. Creatures with an evil alignment have disadvantage on this saving throw. A frightened target can repeat the saving throw at the end of each of its turns, ending the frightened condition on itself on a success. If a target’s saving throw is successful or the effect ends for it, the target cannot be frightened by the Shame Wizard’s Willful Self-Deprecation for the next 24 hours.