Sargeant Riggis Murtaugh or HOW I LEARNED TO LOVE LAWFUL GOOD

Let’s get that right out of the way. I hit the dance floor when the tune is chaotic and I get down with evil. You are not reading the blog of someone who frequently plays as a paladin.

My long-term group was starting up a new campaign and these people have a terrible and frequent penchant for killing my (never lawful good) characters–big surprise, I’m sure. I won’t lie sometimes it’s warranted, but it’s been a constant and most of the time not 100% awesome on all counts (most notably when they killed my tiefling bard on my first game with them, a PC made specifically with the GM try to get the narrative back on track). Anyway we’re gearing up for this guards game where we’re the local low-ranking authority in a medieval city, or at least part of the settlement. 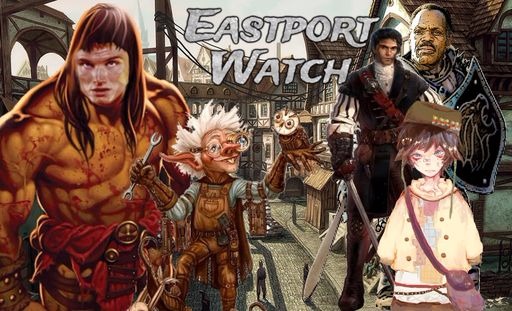 Me: “Look, guys, let’s try this: instead of killing my character at some opportune moment in the future, why don’t you tell me what you want me to play and I’ll build that?”
Asshole #1: “Play a paladin. A lawful good human paladin.”
Asshole #2: “Yes I agree with asshole #1.”
Asshole #3: “Absolutely I agree with these assholes 100%.”

So I thought about it really hard and decided that there had to be some character somewhere that I liked that would make sense to be a lawful good holy cop. I could just play that character and make them my own, right? 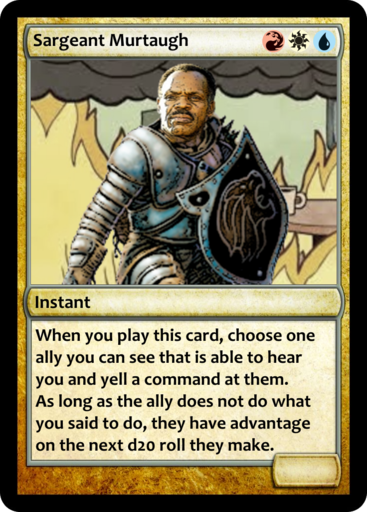 As part of the deal I negotiated Murtaugh to be the de-facto boss of their guard house–just about to retire, of course–and the dynamic worked out great. The rest of the party went about their business while Murtaugh hollered at them, nearly having a stroke most of the time and complaining that he just had to make it to retirement, yelling at Officer Gizmo to stop giving explosive toys to his kids, etc. etc. etc. It was both hilarious and gratifying because like I mention above, I really like this character and so playing him was a joy.

That’s how I learned to love lawful good so if you also have a hangup you can’t get over when trying to play a character outside of your comfort zone, I suggest looking to other media for someone you like and just playing them.

And for those wondering: yes he did eventually retire, get his boat, and now spends his days fishing off of Eastport.

DESIGN NOTES: My compulsion for evil and chaos found itself take hold with the design decisions for Murtaugh here. In my defense he STARTED as a paladin and the rest just..kinda…happened? I will say that I was pretty happy with his effectiveness compared to the single-class adventurers in the party–normally multiclassing dilutes a character’s potential but I guess if you stretch things far enough it can hold water.

Action Surge (1/short rest). On your turn, you can take one additional action on top of your regular action and a possible bonus action.

Divine Sense (2/long rest). As an action, Murtaugh can open his awareness to detect evil forces. Until the end of his next turn, he knows the location of any celestial, fiend, or undead within 60 feet of him that is not behind total cover. He knows the type (celestial, fiend, or undead) of any being whose presence he senses, but not its identity. Within the same radius, he also detects the presence of any place or object that has been consecrated or desecrated, as with the hallow spell.

Divine Smite. When Murtaugh hits a creature with a melee weapon attack, he can expend one spell slot to deal radiant damage to the target, in addition to the weapon’s damage. The extra damage is 2d8 for a 1st-level spell slot, plus 1d8 for each spell level higher than 1st, to a maximum of 5d8. The damage increases by 1d8 if the target is an undead or a fiend.

Fighting Style (Dueling). When Murtaugh is wielding a melee weapon in one hand and no other weapons, he gains a +2 bonus to damage rolls with that weapon.

Fighting Style (Protection). When a creature you can see attacks a target other than you that is within 5 feet of you, you can use your reaction to impose disadvantage on the attack roll. You must be wielding a shield.

Gnarlroot’s Gift – Lighted (1/long rest). Use a bonus action to glow bright light in 30-foot radius for 1 minute, creatures without blindsight that end turn within 5 feet are blinded (no save). 0/10 rounds

Lay on Hands (10 points/long rest, 1 spent). As an action, he can touch a creature and draw power from the pool to restore a number of hit points to that creature, up to the maximum amount remaining in his pool. Alternatively, Murtaugh can expend 5 hit points from his pool of healing to cure the target of one disease or neutralize one poison affecting it. He can cure multiple diseases and neutralize multiple poisons with a single use of Lay on Hands, expending hit points separately for each one. This feature has no effect on undead and constructs.

Pact Magic (Recharge on short rest). Murtaugh is a 1st-level warlock (5th level spellcaster) that uses Charisma as his spellcasting ability (spell save DC 12; spell attack +4). He can cast the following spells from the warlock’s spell list:

Second Wind (1/short rest). On his turn, Murtaugh can use a bonus action to regain 1d10+5 hit points.

Creating Spell Slots & Sorcery Points. As a bonus action on his turn, Murtaugh can expend one spell slot and either gain a number of sorcery points equal to the slot’s level or create a spell slot by expending sorcery points (1st-level—2 points).

Spellcasting. Murtaugh is a 6th level spellcaster that uses Charisma as his spellcasting attribute (spell save DC 12, spell attack +4). He knows the following spells:

Strength of the Grave (1/long rest). When damage reduces you to 0 hit points, you can make a Charisma saving throw (DC 5 + damage taken). On a success you instead drop to 1 hit point. You can’t use this feature if you are reduced to 0 Hit Points by radiant damage or by a critical hit.

Weapon Bond (longsword, handaxe). Over the course of 1 hour short rest, you can bond a weapon to you. Once bonded, you cannot be disarmed unless you are incapacitated and if the weapon is on the same plane of existence, you can summon it to your hand as a bonus action. You can bond up to two weapons at once.