On Turbine Wings, J111-80T, and why I play tabletop roleplaying games

Games like tonight’s session of D&D 5E in Mists of Akuma are why I play tabletop roleplaying games.

BACKGROUND: The party has changed quite a bit from how they started but two PCs remain: Shibonotoko the tanuki rogue (herbalist) and Jill-Bot (aka J111-80T) the steametic rogue (thief). Cajoling their new companions–most recently a human (ceramian subrace) paladin (samurai) named Katsu, Yurei the necroji (a type of undead) wizard (mage), and Cidollorus the human (ceramian) mechanic (heavy armor)–into joining their quest to escape the known world’s confines, they’ve been working for over a year designing a technologically-powered aircraft capable of surviving the tumultuous and dangerous flight across the Great Divide (a wall of energy beyond the endless waterfalls at the Edge of the World). Trying to expedite the construction of their vehicle brought unwanted attention from the Supai Clan, rulers of Kyofu and the prefecture the group calls home, and the nobles impounded the party’s partially-built vessel allowing them to earn it back only by ridding the City of Fans of some erikotera warriors. In the previous game the PCs rescued a captured Katsu from two groups of the shikome (hobgoblin) machine-armored mercenaries, only for Yurei to fall into their clutches necessitating a second, very violent clash in a nondescript warehouse in the metropolis’ South Bluster area.

HAITOKU & J111-80T: I have been running games in this campaign setting for something 4+ years now. It’s eastern fantasy noir steampunk which is another way to say “very very cool”. One of the coolest bits of it is Haitoku, an extra ability score that represents a character’s fall from virtue in their impossible battle against the corrupting fog spreading across Soburin. Gillian has been playing the brilliantly named Jill-Bot–one of many steametics, which are basically robot soldiers that have become fairly ordinary in the wake of civilization’s gradual collapse, left to do as they like and tolerated because they’re rather useful. She’s gone from a slightly greedy thief that fell in love with two kitten snow leopards to a rampant opportunist to now, finally, straight up torturing people and (as she crested Haitoku 22 [+6] so soon to transform) with very little hesitation murdered a youth that witnessed yet another crime committed by the party.

Even the skeleton mage was like ‘don’t shoot the kid!’ but alas–they have not embraced the real pragmatism at the core of the setting and frankly up until this point nobody else truly has either. What Jill-Bot did was absolutely reprehensible, horribly fucked up, repugnant in how unnecessary it was, and I loved every second of it. It wasn’t just this terrible event mind you; it’s been a long, slow, meandering journey off of the right path and into reckless abandon over the course of many months with each new low bottomed out by the next. 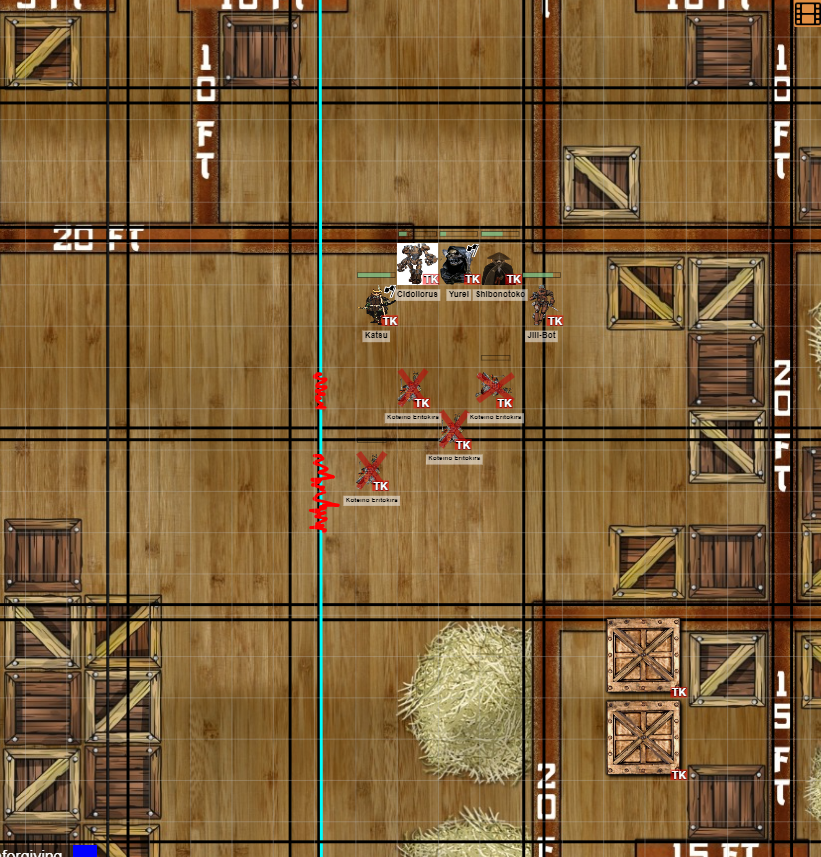 TODAY’S GAME: The party is in a common warehouse, badly wounded but standing victorious over a half dozen of the lethal hobgoblin soldiers. After some discussion they decide to lay low, taking up in a nearby inn for the night and following the establishment’s rules (no touching between patrons) without question. The next morning as they enjoyed a meal in the common room the Mists of Akuma fall upon the area, and before the massive machines of the City of Fans blow it away Shibonotoko produces the urrefu wind chimes and its magic dissipates any of the nearby supernatural fog. All of the customers saved by her actions are extremely grateful, tithing the adventurers with a handful of Imperial Pieces as thanks. Following on a lead Cidollorus receives via ‘that eye in the sky’, the party travels to a black smoke den said to have some eritokera partaking inside. 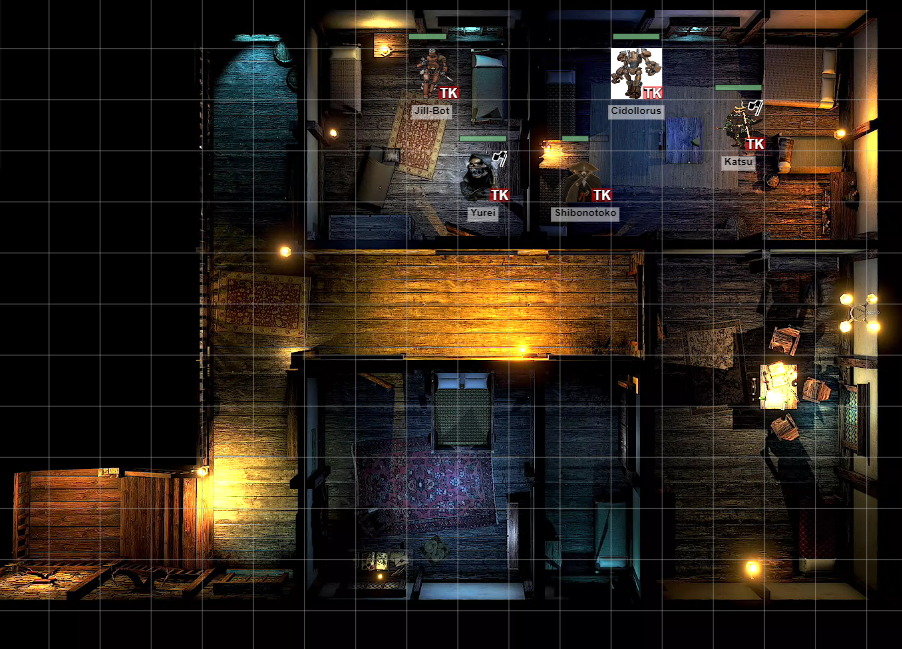 The inhumans (both robotic in nature) have to pay a premium to get inside but Shibonotoko and Katsu are offered a much cheaper price along with some black smoke tar to try out the den’s services. As Yurei, Jill-Bot, and the tanuki sneak around the building Katsu employs a far more direct approach, purchasing the finest opium from the master of the house and sitting with an eritokera warrior. Trading a loaned pipe between them, the two strike an accord and understanding. The party’s necroji mage uses a spell to read the hobgoblin soldier’s surface thoughts–its mind constantly both assessing how best to launch an assault and the possibility of a peaceful resolution–but with his help their samurai convinces the whole company of mercenaries to leave Kyofu for just 100 Imperial Pieces, sending the cadre of shikome to travel to Toppu in Namida Prefecture with the promise of blood and glory in the gladiatorial stadium. 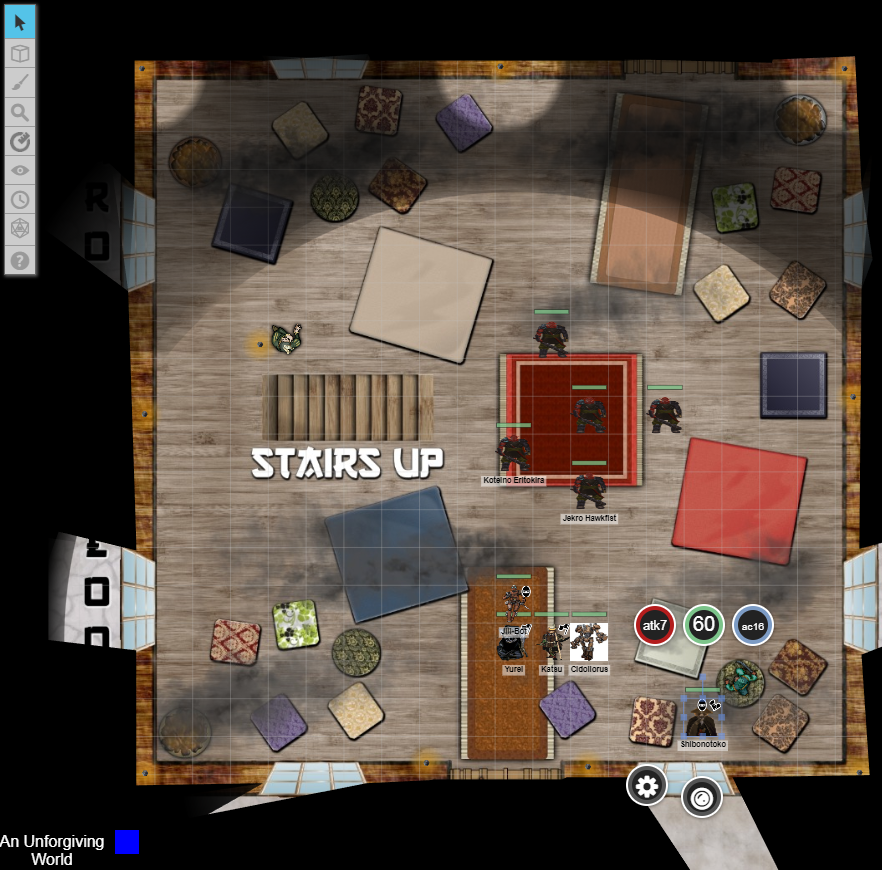 With the last of the eritokera warriors dealt with and their punishment from the Supai Clan complete, the adventurers head to the city’s Imperial Court to inform the powers that be. They are given an audience with the vaunted and respected Lord Dainichi Supai, the supreme ruler of this prefecture and second only to Emperor Hitoshi Masuto. In due course they explain their purpose for constructing their flying vehicle–to explore the world beyond–but it is Yurei’s cunning words (‘Would you not desire the first flag to take land from the foreigners to be from Supai?’) that convince him to not only release their property, but sponsor their voyage as well. What is most stunning however is Katsu’s brazen request to be ronin no more, asking Lord Dainichi to make him a retainer samurai to the Supai Clan–a request that is granted! [there were amazing rolls here] 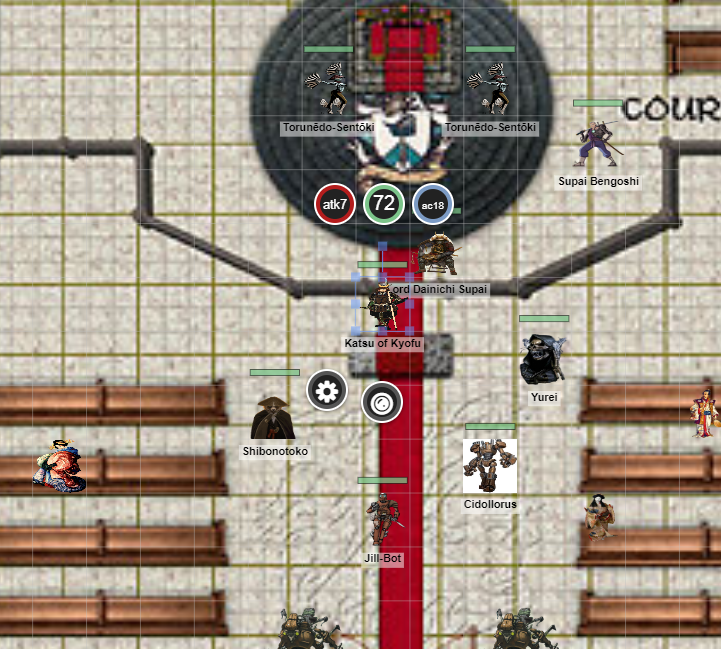 The adventurers are led to a sizable shed in the servants area of the noble quarter of Kyofu, given to them to use as a headquarters and garage to construct their flying machine. Cidollorus evaluates their materials and estimates that it will take him 2 weeks to completely finish the vehicle, though Soburin’s limitations for metallurgy pose a serious problem in making it a truly airworthy craft. Before leaving for Rimono Prefecture to see what developments researchers there have attained (their chemistry, though bent towards explosives, is far superior) Katsu orders one of his retainers to fetch the Supai Bengoshi (a woman the PCs have crossed, spurning her orders to eradicate all of the eritokera and allowing the Hawkfists to leave the city alive) in pursuit of augmetic enhancements. She sends over a suspiciously macabre and possibly deranged surgeon, but the samurai allows him to operate–as does Jill-Bot–and both are bestowed powerful technologies, a laser eye for the former and a cabling arm for the latter. 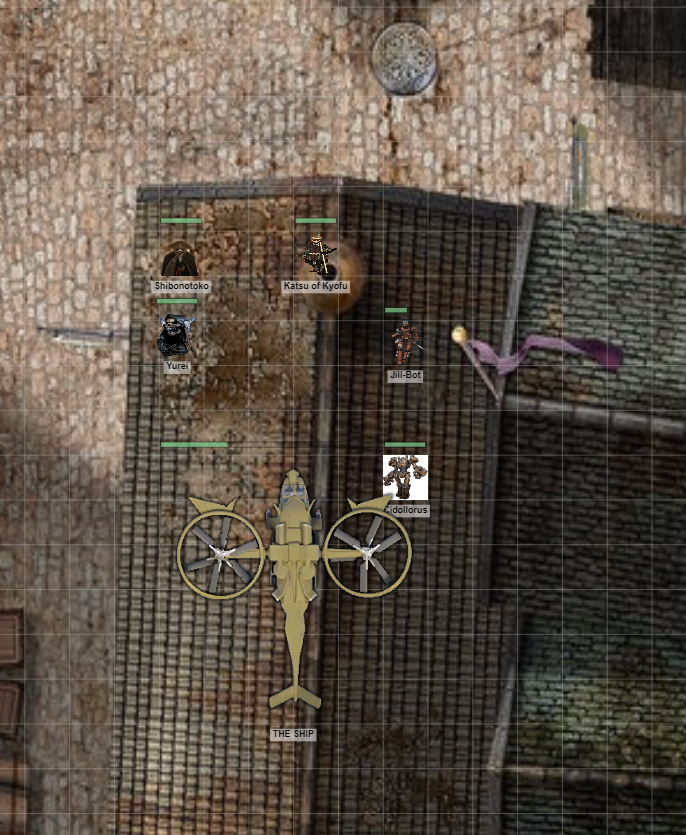 Briefly stopping by her shack but choosing not to go near it once she realizes that there are other steametics watching her abode, Jill-Bot and the party purchase themselves passage on a longboat headed west towards Rimono Prefecture. As the moon rises into the sky that night the corruption stemming from her last augmetic finally takes hold of the steametic rogue and she transforms, changing from an inorganic construct into a monstrosity of flesh and machinery hellbent on bloodshed!

An epic battle ensues on the deck of the ship as she unleashes the unholy power as yet unseen in Soburin, the result of one of the automaton people fully ruined by the dark influence of the Mists of Akuma. The adventurers eventually defeat the abomination that was once their ally but only through exceptional luck, the prodigious use of lightning, and the aid of an unlikely ally. 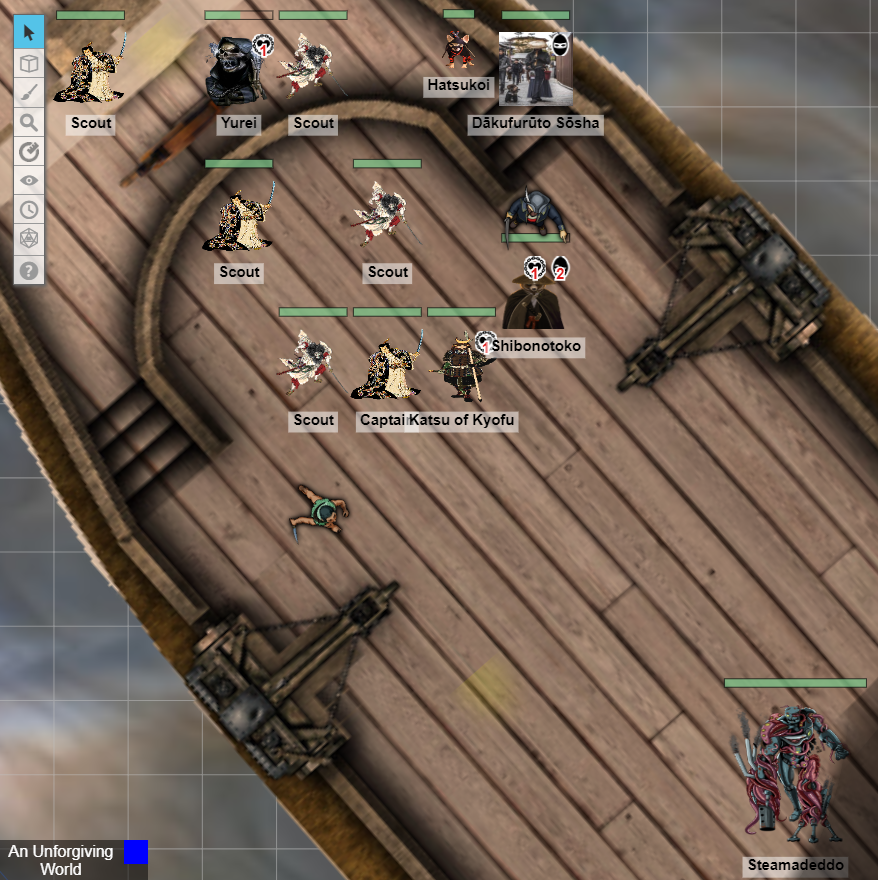 GM Note: Gillian was mortified that her beloved (first?) tabletop RPG character bit the dust but she apparently *adored* wrecking the party as a powerful monstrosity on her way out. I think everybody found it downright exhilarating, and really that’s what we’re all trying to achieve when we sit down with the dice.