One of the first tasks I had as editor was to make a pitch call, contacting all the designers (over 100!) vying for EN5ider‘s paid commissions. If you’re interested in doing that (and you should be, you get paid and the work comes back fully under your control after a year to be republished–it’s awesoooome) check out the guidelines here. I asked for class submissions and wanted to get 8 solid concepts to go along with the gunfighter (the last class edited by my predecessor James Haeck–it is A Touch More Class) however only 7 really solid pitches came in.

Which meant it was Mike-time. If you’re new to the party I was once a frequent contributor to EN5ider and designed 3 of the classes that appear in A Touch of Class. While I’ve had the opportunity to revise and tweak those (get the revised edition as part of the A Touch More Class Kickstarter!), my goal with the feywalker–a true agility warrior–didn’t quite hit as well as I was originally intending, landing far afield in what reviewers like to call the ‘Peter Pan’ class. That’s not the worst designation by any measure but I knew I could do better: enter the gemini! 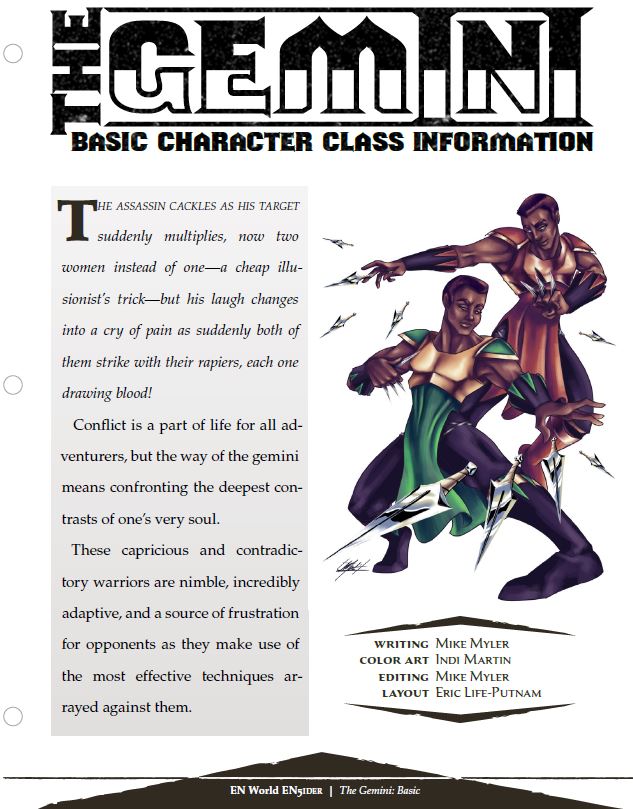 The concept of an adventure wrapped up in duality is not mine–the first time I encountered it was a larp system I stumbled into during high school where you and a buddy could choose a weird race that makes you into supernatural twins. That’s not what the gemini class is, but that’s where this idea started. What you’re really getting into with a gemini is saying: my warrior is extremely complicated, both in the display of their combat skills and in how they approach life. The class revolves around the following central features: Copycat, Multiply, being quick as all get out, and the concept of multiple selves strung out far beyond the three gemini balances included as subclasses.

Copycat is exactly what you think it is: observe somebody doing something and then gain the ability to do that thing. This starts out as very simple stuff like a single skill, tool, or weapon proficiency, then gets more complicated the further a gemini progresses with limited feature and trait mimicry (eventually allowing for copycat casting, albeit only once a rest and at the endgame of 18th level).

Multiply is one of the places where the gemini makes itself extremely distinct. Imagine if you mixed Extra Attack with mirror image–welcome to the main combat function of the gemini class. Mind you there’s a lot of tweaking to make that scale and work correctly (your semi-real duplicates are harder to hit than the spell’s) but if you’re like “there’s something weird about the art for this class” that’d be it.

Quickness is a big deal for an agility warrior class and the gemini has it with dashes of ‘speedster’ elements: extra opportunity attacks, counterattacks, and the ability to turn 8 pieces of thrown ammunition into a metallic storm area attack.

Multiple selves covers the gamut of cloning yourself a backup or making lesser duplicates to go out and learn about the world (a la Jamie Madroxx the Multipleman–high level features), but most importantly the gemini balances. This is where the class REALLY shines, reinforcing a fun roleplaying element that folks have embraced: each has two central aspects (old/new, body/mind, courageous/cowardly) and every time a gemini finishes a long rest, they roll to determine which side of their personality is at the fore. 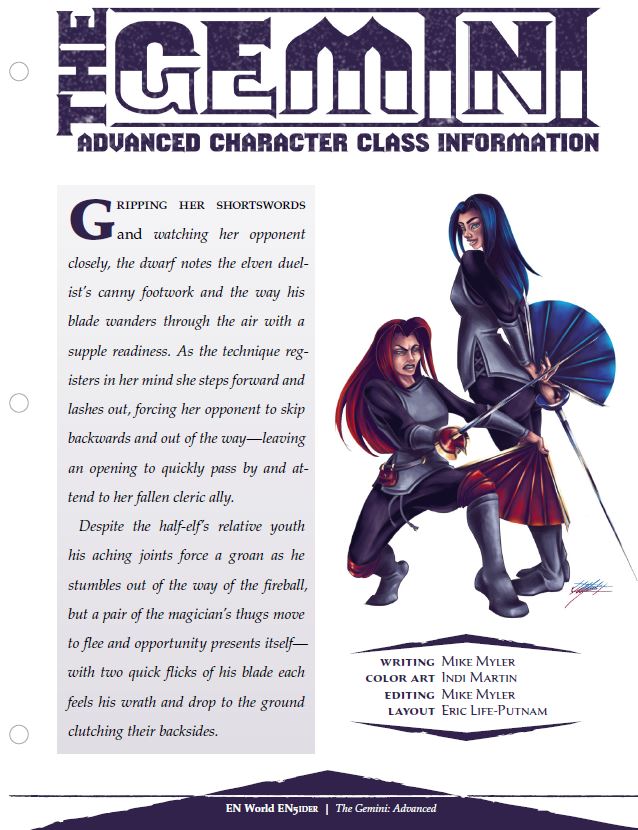 DESIGN HURDLE: “This should be a fighter archetype.”

The biggest obstacle with the gemini class is one that people really like to kick up whenever a new class is being considered: that it should be an archetype. In the case of the gemini it’s not too much of a hurdle fortunately, but it certainly felt like it was going to be impossible until a) I thought of the semi-real duplicates Multiply feature as a replacement for Extra Attack, and b) realized the potential for blazingly cool subclasses with Gemini Balances, intertwining roleplaying aspects into the class’ fundamental traits.

If this sounds awesome to you then please check out the A Touch More Class Kickstarter and if you can’t wait for the PDF/book (which deliver as soon as possible after the project funding period ends) consider joining the EN5ider Patreon! It can be as affordable as $1 a month and as soon as you join you get instant access to Gemini Basic, Gemini Advanced, and the rest of the 270+ article archive!