Today we’re getting into one of my thematic favorites designed by an excellent new freelancer named Andrew Engelbrite (of the LootTheBoss crew). He very rapidly became one of my go-to designers and regularly appears in EN5ider (as well as my own books–he’s got a sidequest in Trade War and two Mists of Akuma adventures on the way besides). I’m a big fan and THE FATEBENDER is one reason why! As an old D&D 3.0 auspician player, love for characters like Domino or Longshot from the X-Men, and using Luck in d20 games for years now I had extremely exacting standards for this concept–and Andrew hit it out of the park! 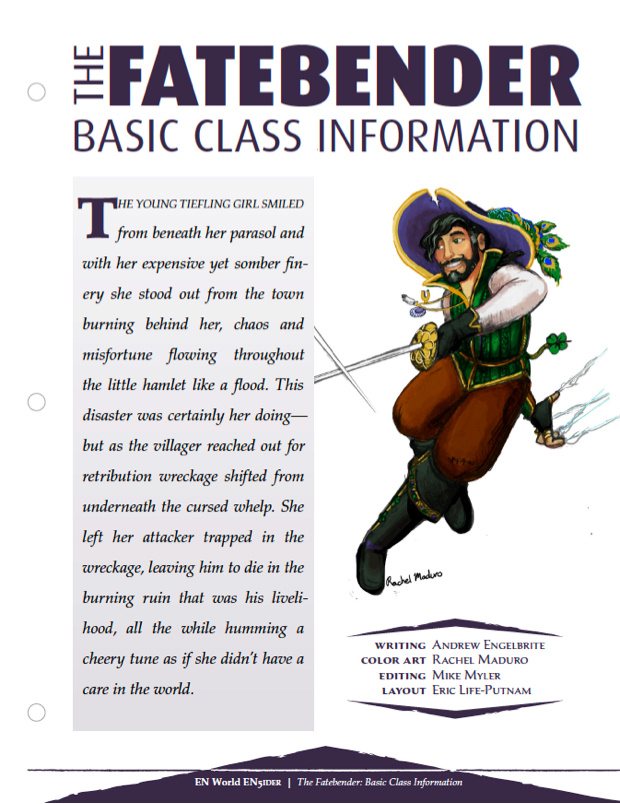 As the name implies this class is all about manipulating luck and Andrew did a wonderful job of balancing that incredibly useful feature while keeping it fun up into high-level play. On top of that the subclasses are all awesome: mascots (lucky and favoring 20s), jinxes (spreading misfortune and favoring 1s), and the weavers (who have their magic number change daily!).

Andrew and I went back and forth on the main resource for balancing this class–that darned fate pool. My big worry was making the fatebender too irresistible for multiclassing because Fatebend is basically a superior version of a feat which there’s no access to normally until 4th level. What guided us (aside from playtesting of course) was the bard; if you’re rocking a high Charisma it’s a good deal either way, but (maximum) 4 rerolls/short rest plus some armor/weapon proficiencies is noooot quite the sterling offering it first seems when compared to (maximum) 4d6/long rest plus 2 unlimited cantrips, 2 spell slots (choosing out of 4 spells, if they aren’t being used for smites anyway), and a skill proficiency. Looking at it from a few other directions (barbarian) it’s a swap for Constitution modded AC and Raging 2/long rest, druids or paladins initially take a little wash, fighters get more dependable features but not necessarily with as good returns–given that luck is the whole shtick it plays on a level field with its main competition (bards) and I’m pleased with it.

If this sounds awesome to you then please check out the A Touch More Class Kickstarter and if you can’t wait for the PDF/book (which deliver as soon as the project funding period ends) consider joining the EN5ider Patreon! It can be as affordable as $1 a month and as soon as you join you get instant access to Fatebender Basic, Fatebender Advanced, and the rest of the 270+ article archive! 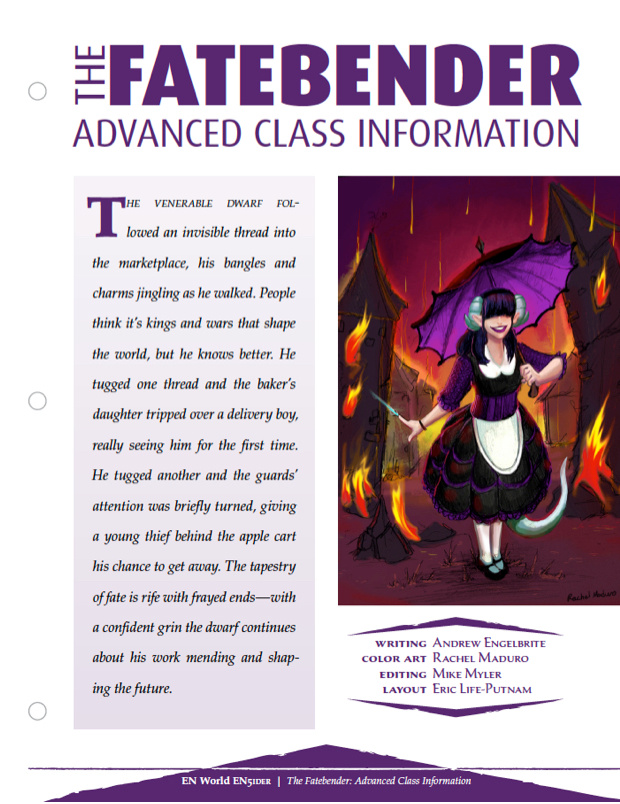