I had more than one class idea of my own (aside from the Gemini) but I both didn’t want to make half this project about my designs and knew that this second concept was going to require some thorough playtesting. With these things in mind I called upon Erik Evjen over at IGRE Publishing who at the time was also the head of a regional gaming group up there in the USA’s frigid northern states–somebody in a proper position to help work out the many kinks for the creature controlling MONSTER TAMER! 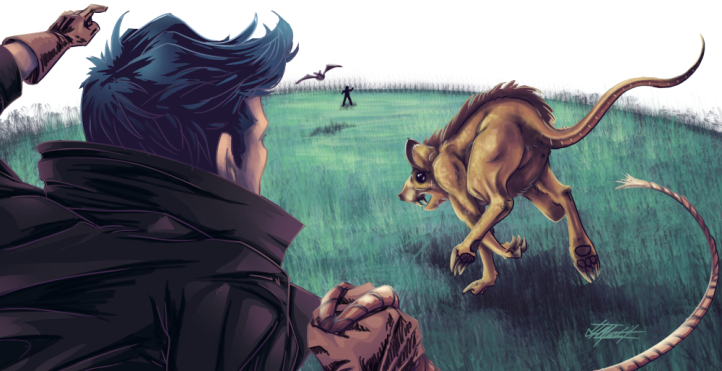 As much as I adore the luck-manipulating concept for fatebenders, as is obvious with the gemini I’m also intrigued by classes that allow for players to play a character and also something more–whether that be a character with two distinct aspects, or a character that’s only whole when both parts of it are in play (can I get some love for Devil Dinosaur and Moon Boy?!). That’s where the monster tamer comes in! Unlike a beastmaster ranger, when they aren’t with their pet a monster tamer is simply not going to match up with its competition. On their own they’ve got great hit points (d12s!), can use a whip like a boss, and if their buddy is dead have a kind of super-rage (at high level). Our goal was for them to truly shine when their creature companion is in play, and by golly monster tamers really can shine!

DESIGN HURDLE: All the Monsters

We went up and down and back again over which creatures qualified for use with the monster tamer, how to categorize them, where to draw the line, and which were going to be straight-up problematic. Will it petrify/destroy everything in sight or provide flight at too early a level? GM’s need to practice discretion there and in those cases are specifically invited to. Otherwise because the monster tamer is essentially a walking target dummy with hit points (plus whips!), the creature type restrictions in place put the burden of balancing to the system’s already (mostly) balanced monsters (propped up a bit from the monster tamer’s hit points). It doesn’t allow for the party to have a monster included with them at a CR higher than 8, but even with the types (aberrations, beast, draconic, monstrosities, and oozes) and Intelligence limiter that leaves a very open field.

If this sounds awesome to you then please check out the A Touch More Class Kickstarter and if you can’t wait for the PDF/book (which deliver as soon as the project funding period ends) consider joining the EN5ider Patreon! It can be as affordable as $1 a month and as soon as you join you get instant access to Monster Tamer Basic, Monster Tamer Advanced, and the rest of the 270+ article archive!