When I became the editor for EN5ider my first objective (aside from keeping the high level of quality D&D 5E articles coming!) was a new suite of classes to follow up on the original A Touch of Class. In this series I’m going to explore the 9 new entries in A Touch More Class, reveal some of the development process behind them, and consider the obstacles in getting these from ideas to fully finished concepts.

The Kickstarter launched a week ago, it FUNDED in 4 MINUTES (ahhhh!), and as of this writing has raised more than $47,000/£37,000!  If you are still on the fence about pledging, remember there are free previews for the geomancer and savant classes.

Let’s get real: everybody wants blood magic. It’s a fun concept, it offers wonderful roleplaying opportunities, there’s plenty of that kinda supernatural treatment for blood in humanity’s history,  and it’s cool. I wasn’t terribly surprised when a cool fellow like Chris Rippee–the gamemaster that got me into Dungeons & Dragons 3rd Edition almost two decades ago–pitched THE BLOODWEAVER, and as usual he knocked it out of the park! Of course in typical Chris-fashion we also went well beyond the original project parameter but no worries, the only people that benefit from that are you. 😉 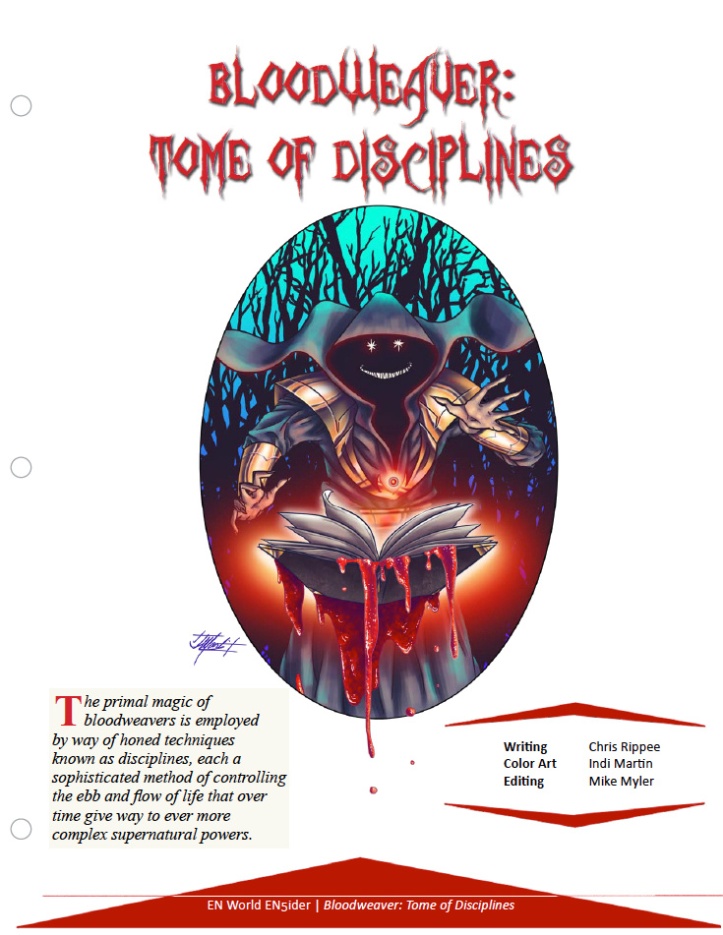 “This sounds really cool,” I wrote, “but do not remake the mystic here ok? We just do not have the budget for 11,000 words. Not for you, not for me, not for layout.” I meant these things, I truly did, but after going through Chris’ work I realized very quickly that what I wanted didn’t much matter–the bloodweaver required a special spellbook all its own (ultimately making it longer even than the Tinkerer class).

Bloodweavers–as you might expect–power their magic (disciplines) through sacrificing blood. This starts with a daily-recharging Sanguine Reservoir, but like any fun blood magic that’s something that can be replenished through hit point-sacking class features and other effects besides. If it has to do with blood however, bloodweavers have something to do with it: making good with death saves (advantage!), sensing living creatures, ignoring poison and disease, and so on. The multitude of disciplines bring a ton of variety to a player’s design choices, but the archetypes (Traditions of Blood) are probably more exacting here than anywhere else in A Touch More Class.

As mentioned above this class used up more space than we had. Fortunately two things worked in our favor: 1) unfortunately the regular layout guy needed a little bit of a break which left me to fill in for a few weeks, and 2) I am willing to do extra work on the cheap to make something special. Developing Chris’ notes and going back-and-forth with him, I put most of the words for the Tome of Disciplines together and then put those to the published page! If I didn’t adore the concept of blood magic, been working on this with an old friend, or have these unexpected circumstances in my lap, the bloodweaver simply could not have happened. Every once in a while in game design though, you get lucky. 😀

If this sounds awesome to you then please check out the A Touch More Class Kickstarter and if you can’t wait for the PDF/book (which deliver as soon as the Kickstarter funds are sent to EN Publishing) consider joining the EN5ider Patreon! It can be as affordable as $1 per month and as soon as you join you get instant access to Bloodweaver Basic, Bloodweaver Advanced, and the Tome of Disciplines along with the rest of the 270+ article archive! 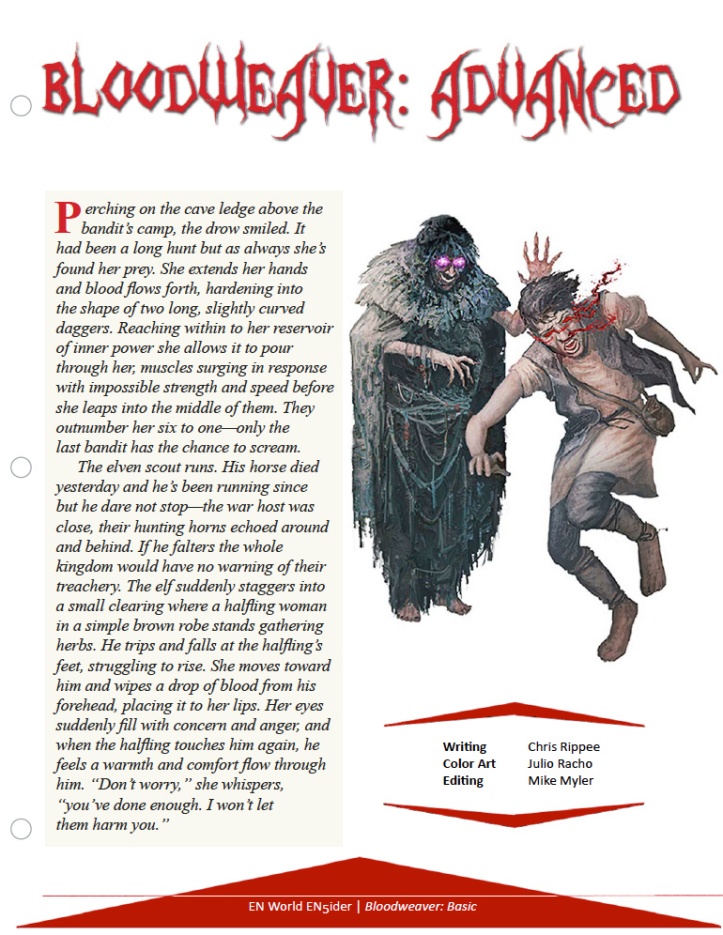