At some point in the past couple years my sister was having a real hard time down in the Bible Belt (ESCAPE, HEATHYR! ESCAPE!) and I asked folks to help her out if they could–in exchange they’d get a character of their choice built in the system of their choice here on the blog. The very excellent Brian Wiborg Mønster tossed her a few dollars and asked for Autolycus, King of Thieves. Since Pathfinder 2nd Edition comes out later this week this is my last chance to make good on that build without reading the new rulebook so: here you go, Brian! 😉 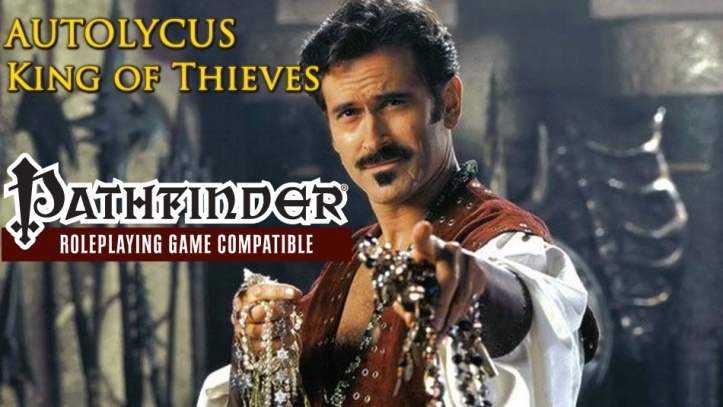 TACTICS
Before Combat Autolycus wants nothing to do with combat and tries to avoid it if possible, preferably by providing whoever is itching for a fight with him an entirely different (more troublesome) opponent.
During Combat When forced into combat Autolycus uses Combat Expertise and tries to avoid being hurt more than inflicting any harm, usually only staying long enough to achieve his objective (stealing something) before fleeing at the first good opportunity to do so.

STATISTICS
Str 15, Dex 18, Con 13, Int 13, Wis 12, Cha 16
Base Atk +7; CMB +9 (grapple +13); CMD 25 (grapple 29)
Feats Combat Expertise, Dodge, Greater Grapple, Improved Grapple, Improved Unarmed Strike, Weapon Finesse
Skills Acrobatics +17, Bluff +16, Climb +15, Diplomacy +16, Disable Device +19, Escape Artist +17, Perception +14, Sleight of Hand +17, Stealth +17, Swim +15
Languages Common, Undercommon
SQ careful disarm (whenever Autolycus attempts to disarm a trap using Disable Device, he does not spring the trap unless he fails by 10 or more, and if he does set off a trap he was attempting to disarm he adds double his trap sense bonus to avoid the trap), distraction (when Autolycus is detected while using Stealth, he can immediately attempt a Bluff skill check opposed by the Sense Motive skill of the creature that spotted him; if this check succeeds and the target cannot see Autolycus, the target assumes that the noise was something innocent and disregards the detection; this ability can only be used once during a given Stealth attempt and if the same creature detects Autolycus’ presence again, the ability has no effect), rogue talents (fast picks, fast stealth, finesse rogue, nimble climber, quick disable), trapfinding +5
Gear +1 studded leather, +1 keen returning daggers (2), helm of invisibility (as a ring of invisibility), light crossbow with 20 bolts, ring of protection +1, mwk thieves’ tools