It’s finally here! After years of hard work and innumerable hours of toil my urban mega adventure masterpiece is ready for other GMs and players to enjoy! 😀 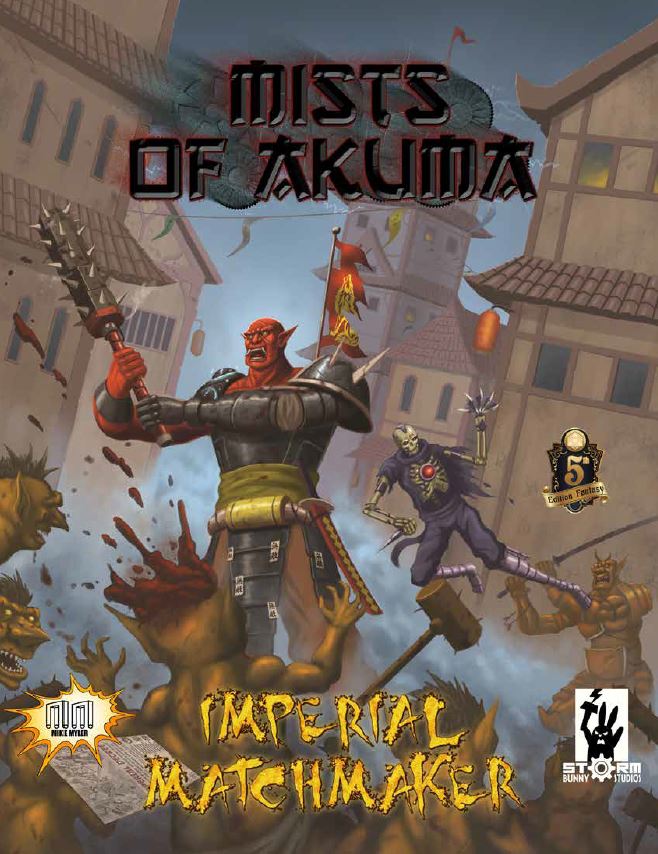 Where do we even START with this book? It’s the biggest (365 pages) and hands-down best adventure I’ve ever worked on, and I loved doing it! The section on Sanbaoshi is enormous and takes up nearly half the page count–the official D&D 5E offerings for sandbox urban adventures have left me terribly unsatisfied, and I am so freaking proud of how dynamic and detailed the capital of the Imperial Prefecture now is. Plus Indi Martin’s enormous 2-page isometric map? WHAAAAAAAAAAAAAAAT?!

I’m getting ahead of myself though so let’s slow it down and take a look at the Table of Contents in Imperial Matchmaker:

If you count it out that’s more than 40 maps and over 120 statblocks! OVER 100 CHARACTERS!! That doesn’t even cover the characters that use core D&D 5E NPC stats (for example, the 20 brides and grooms) and really it’s pushing more like 200. While I run Mists of Akuma games now, I just pull out this book to find a unique build to use for an NPC the party have taken an interest in (or ire against). So convenient! ლ(´ڡ`ლ)

Let’s take a second to talk about artwork because there are sooooooo many illustrations in this book! Of course like every other Mists of Akuma book there’s plenty of ukiyo-e to be had, some of which is just remarkable (see above). Stock art makes appearances as well, but there isn’t any scarcity of original pieces either. Sara Shijo got to make an erikotira warrior up close (again, see above) and Claudio Pozas got to finish up the iconics. Speaking of the iconics, there’s a companion book to pick up for pregenerated characters or an AWESOME collection of extra rivals. 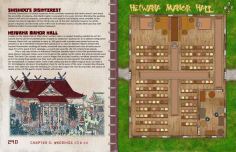 Speaking in a larger narrative sense Imperial Matchmaker brings to close a major plot seed in the core Mists of Akuma setting book (which has a classic and expanded anniversary edition). With the Trade War adventure path we finally have some closure regarding the Pale Master (the villain at the end of the module in the setting book) and the creation of the Mugen Bone Mound, and with this mega adventure the Battle of Broken Spears is finally fully resolved but not without another great occurrence–which I can’t talk about here, although I will tell you most loyal readers that the two campaigns tie together and will have a major impact on what happens in Soburin with Beyond the Great Divide.

That however is a tale for another time at least many, many months from now. Until then there’s more Mists of Akuma goodness on the way to follow up on Honorable Wills and Seven Grains of Rice, so stay tuned! Komoro Toko’s Menagerie is on deck and ready to take flight after Imperial Matchmaker gets some time to breathe. ^___^