The Hundred Acre Wood hides many secrets, both wondrous and dark. Far beneath the elms and idyllic glades dwell terrible horrors from places where no mortal dare tread. Without the guidance of Christopher Robin and with the promise of sweet smelling honey drawing him closer, one night Winnie the Pooh waddled his way into the abode of a creature which must not be named. In exchange for a pot that never runs out of the delicious golden sugary syrup the bear craves so badly, he traded his soul and pledged service to a new master. Now he spends his days endlessly consuming, only stopping when suddenly the jar goes empty—refusing to fill again until whatever new desire the foul thing that controls him has is met.

(Illustration by CoffeeHouseArtist on DeviantArt) 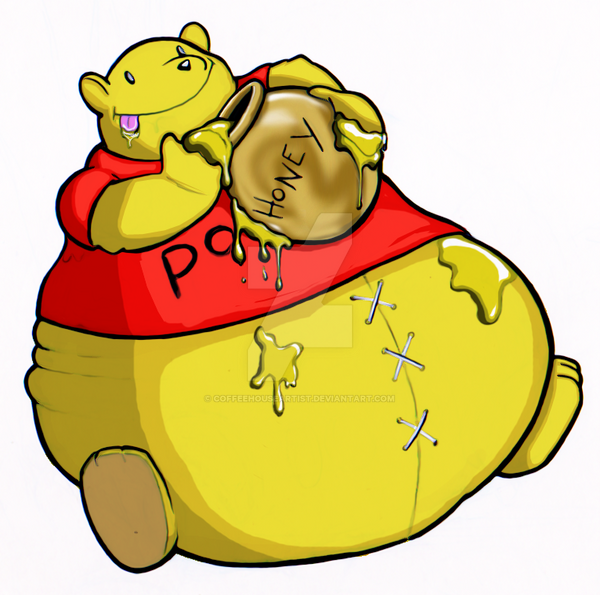 Dark One’s Own Luck (1/Short Rest). When Winnie the Pooh makes an ability check or a saving throw, he can choose to add d10 to the roll.

Keen Smell. Winnie the Pooh has advantage on Wisdom (Perception) checks that rely on smell.

Pact of the Chain. Winnie the Pooh can cast find familiar as a ritual to summon a quasit named Piglet. When Winnie the Pooh takes the Attack action, he can forgo one of his own attacks to allow Piglet to make one attack with its reaction.

Pact Magic (Recharge on Short Rest). Winnie the Pooh is an 11th-level spellcaster and his spellcasting ability is Charisma (spell save DC 16; +8 to hit with spell attacks). He knows the following warlock spells:

Eldritch Blast. Ranged Weapon Attack: +8 to hit, range 300 ft., three beams at up to three targets. Hit: 9 (1d10+4) force damage and the creature is pushed 10 feet away from Winnie the Pooh in a straight line.

Tigger went looking for Christopher Robin when his cherished friend left the Hundred Acre Wood—unfortunately the world found the stuffed tiger first, teaching him lesson after lesson in cruelty and disappointment. Tigger rolled with the punches for a while but as the years dragged on his spirit diminished, his heart hardened, and scars accrued until finally he became a downright mean bastard. Now the hard-bitten tiger’s pep has been replaced by cynicism and a burning urge to dish out some of the pain he’s suffered in his travels, leading him to strike first and ask questions if anyone has enough of a jaw left to answer.

Bounding Charge. If Tigger moves at least 15 feet straight toward a target and then hits it with a slam attack on the same turn, the target takes an extra 7 (2d6) bludgeoning damage. If the target is a creature, it must succeed on a DC 15 Strength saving throw or be knocked prone.

Brave. Tigger has advantage on saving throws against being frightened.

Energized. Tigger has advantage on saving throws against exhaustion.

Keen Smell. Tigger has advantage on Wisdom (Perception) checks that rely on smell.

Mobile. Tigger can Dash through difficult terrain without requiring additional movement. Whenever he makes an attack against a creature, until the end of his turn Tigger doesn’t provoke opportunity attacks from that creature.

Monstrous Momentum. For every 15 feet he moves on its turn, Tigger gains a +1 bonus (maximum +3) to Dexterity saving throws, melee attack rolls, and melee damage rolls until the start of his next turn.

Pounce. If Tigger moves at least 20 feet straight toward a creature and then hits it with a slam attack on the same turn, that target must succeed on a DC 15 Strength saving throw or be knocked prone. If the target is prone, Tigger can make one slam attack against it as a bonus action.

Tigger Tumbling (Recharge 5–6). Tigger can use his bonus action to flip, roll, and tumble his way through combat, making a Dexterity (Acrobatics) check. Until the start of his next turn, Tigger replaces his armor class with the result.

Slow Fall. Tigger can use his reaction when he falls to reduce any falling damage he takes by 50.