Check out the last post for Winnie the Pooh, Piglet, and Tigger.

Abandoned by his friends and left with only vegetables to keep him company, Rabbit went quite mad. His penchant for magic tricks and communing with nature took on entirely new purposes as they became his obsessions. With the help of his talking plant friends he scoured the Hundred Acre Wood for its most potent secrets and exploited them all, gaining a small mastery over the arcane and nature while spreading corruption, death, and woe in his reckless wake. The ardent gardener has sewn doom for the entire region and in the face of this epic failure Rabbit has taken an authoritative stance, subjugating everyone he sees and conscripting them into service to stop the spread of the decay he’s unleashed in a futile pursuit of a redemption he will never know.

(Rabbit illustration by zdrer456 on DeviantArt) Keen Hearing and Smell. Rabbit has advantage on Wisdom (Perception) checks that rely on hearing or smell.

Madness. Rabbit constantly speaks to animals and plants that don’t understand him, often before enacting the magic required to make them able to talk at all. He has advantage on Wisdom and Charisma saving throws, but at the end of each minute he uses an action to whisper to or be whispered to by a vegetable or varmint.

Spellcasting. Rabbit is a 7th level spellcaster that uses Intelligence as his spellcasting ability (spell save DC 15; +7 to hit with spell attacks). He knows the following spells from the druid and wizard spell lists:

Fast Kick. When moving away from a prone creature Rabbit can make an opportunity attack.

Perhaps the most disturbing direct victim of Rabbit’s ambitions is Eeyore. When Christopher Robin left, with Tigger gone and Pooh plummeting into darkness, the depressed donkey’s will to live finally faltered. Rabbit was the first to find his corpse and, his own demented fall already underway, did all that he could to revive his beloved friend—and succeeded, in a way. Though it speaks like Eeyore and seems to have his memories, what shambles around in his moldering skin is a disgusting entity dragged down from the cosmos, playing host within the cadaver. Little is known of his true intent, but for now “Eeyore” spreads maladies and virulence wherever he walks and he’s become something of a herald for what will soon come to pass in the Hundred Acre Wood. 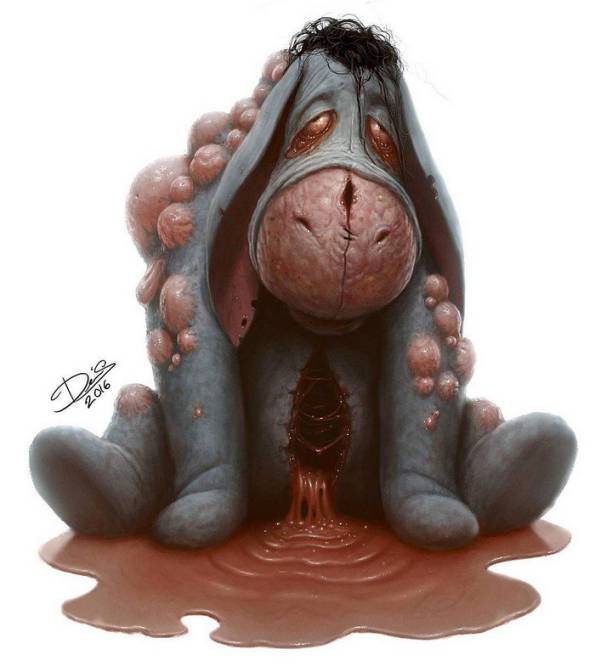 Aura of Fear. Humanoid creatures within 15 feet of Eeyore must succeed on a DC 14 Wisdom saving throw or become frightened for 1 minute. A creature can repeat the saving throw at the end of each of its turns, ending the effect on itself on a success. If a creature’s saving throw is successful or the effect ends for it, the creature is immune to Eeyore’s Aura of Fear for the next 24 hours.

Ill-Born. Eeyore is immune to the effects of diseases but is a carrier sickness. Instead of dealing poison damage to a creature he hits with his bite or claw attack, Eeyore can afflict the creature with a disease instead.

Innate Spellcasting. Eeyore’s innate spellcasting ability is Wisdom (spell save DC 14, +6 to hit with spell attacks). He can innately cast any necromancy spell of 3rd-level or lower, requiring no material components:

Magic Resistance. Eeyore has advantage on saving throws against spells and other magical effects.

Bite. Melee Weapon Attack: +5 to hit, reach 5 ft., one target. Hit: 5 (1d6+2) piercing damage plus 7 (2d6) poison damage. The target’s hit point maximum is reduced by an amount equal to the poison damage taken. The reduction lasts until the target finishes a long rest. The target dies if this effect reduces its hit point maximum to 0. A humanoid slain in this way rises up as a zombie after 1 minute.

Carriers (Recharge 6). A pussing blister pops within Eeyore or on his skin and 1d4 homunculi (with the Ill-Born trait) appear in unoccupied adjacent squares.