It would be ridiculous to try and out-do what Sean K. Reynolds has already brilliantly done for D&D 3.5 in The New Argonauts so I’m going to 1) thank him for making that supplement (thank you Sean!) and 2) tell you to go download it (it’s free–give it 5 stars because damn). This blog series is not intended to be a reproduction of that product, only a conversion update. Go get it.

ALSO I have a column over at ENWorld! Check it out for more Mythological Figures for Dungeons & Dragons Fifth Edition (ranging from Ancient Greece to medieval France, Japan, and more 😀 ) 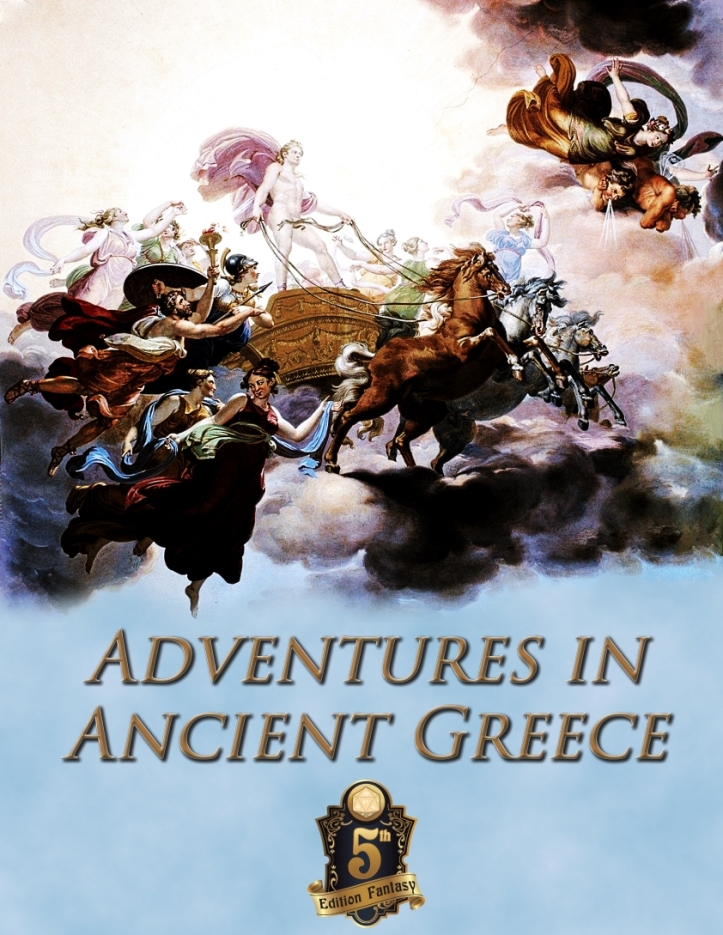 Post 2: Aeetes’ Bulls (aka Khalkotauroi or Bulls of Colchis)

Centaurs. Greek centaurs are boorish, rude, drunk, rapacious brutes that eat raw meat, crash parties and weddings, and try to run off with women. They originated in Thessaly (home of the Lapith people) and are the sons of Thessaly’s king Ixion and a cloud (sent by Zeus to fool Ixion, who lusted after Hera). Centaurs shout insults at their opponents and use their bows as much as possible. If seriously wounded, they run away.

An Intelligence (History) check reveals the following information: 8—Centaurs are brutish monsters that are often drunk and like to steal mortal women to bear their young. 13—They are technically part of some royal family, though they are an annoyance even in their homeland and are tolerated only grudgingly. 18—Their lineage goes back to king Ixion of Thessaly, who sought Hera for a bride and was tricked by Zeus into fathering the centaurs with a cloud.

Cyclopes (Greater). The first three cyclopes (Arges, Brontes, and Steropes) were children of Gaea, born in the era of titans. Cast into Tartarus by Uranos because they were ugly, the gods freed them and in gratitude the cyclopes forged weapons for the upcoming fight against the titans, including Zeus’ thunderbolts. When Asclepius had the audacity to raise the dead, Zeus killed him with a thunderbolt; this angered Asclepius’ father Apollo, and though he could not retaliate against Zeus, he could retaliate against those who made the thunderbolt,and slew one of the cyclopes (and was punished for this murder by Zeus, who forced him to be a servant to a mortal for one year). The cyclopes in the core rules are greatly weakened and their minds dulled, probably due to some unknown transgression against the gods or a weakening of the mythic powers in the world. For full-power cyclopes, use storm giant statistics but without spell-like abilities or water breathing. The cyclopes normally carry at least 4 thunderbolts with them, and they strike first with those. In melee they pound enemies with their fists. Their diminished intellect isn’t enough to make them forget their earlier days of glory, and they bitterly fight to the death, not fearing the afterlife.

An Intelligence (History) check reveals the following information: 10—The cyclopes are great one-eyed giants, skilled at building and forging, and as old as the ancient titans. They made Zeus’ thunderbolts. 15—There are stories of less gifted cyclopes who herd sheep in the world instead of forging with Hephaestus, but they are a different breed. 20—Apollo is said to have killed one of the three cyclopes as vengeance for the thunderbolt that killed his son Asclepius.

Cyclopes (Lesser). These more common cyclopes tended sheep and goats on one of the islands visited by Odysseus. Brutish and without the godly powers of their greater cyclopes kin, they ate human flesh just as readily as they ate animals. Use the statistics for the greater cyclopes (above) to represent these cruder specimens, except they lack immortality. The lesser cyclopes carry no thunderbolts, and are content to bash their enemies to death with their bare hands.

An Intelligence (History) check reveals the following information: 10—A more numerous tribe of cyclopes is said to herd sheep on one of the Aegean islands. Unlike the giants who forge Zeus’ thunderbolts, these giants are no smarter or skilled than a man, hold to no laws or gods, and eat human flesh.

Lamias. Lamias are evil creatures that seduce men and (once the man falls asleep) feasts on their blood or flesh. From the waist up they’re human, but instead of legs they have a snake tail. Lamias use their magic to disguise their nature from their prey. These creatures are considered demons by the Greeks, and don’t surround themselves with weak-willed former victims. They avoid direct combat with multiple opponents, choosing to single out a male target, lure him away from his friends to a private place, and attack him once he’s fallen asleep.

An Intelligence (History) check reveals the following information: 9—The lamia is a kind of demon that disguises herself as a beautiful woman so she can seduce men and eat them. 14—In her real form, a lamia has a snake tail instead of legs.

If you are playing through New Argonauts using this 5E conversion, when the players encounter hydra (not going to say when!) only use one of the monsters (not two).